Goa and Punjab will be the first testing grounds for the BJP government’s much-flaunted demonetisation policy. 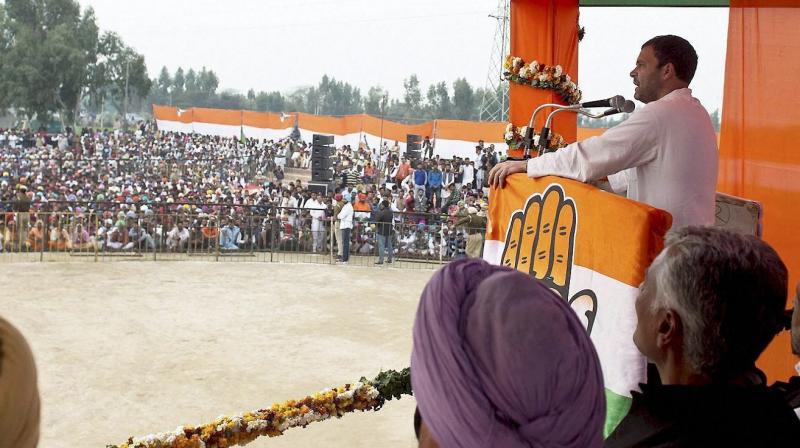 Congress Vice President Rahul Gandhi addresses an election rally on the concluding day of the campaigning for the state assembly polls, in Lambi near Muktsar. (Photo: PTI)

New Delhi: The day of reckoning for the BJP is nearing. Campaigning ended on Thursday evening for two BJP-dominated states — Goa and Punjab — that will go to the polls on Saturday. It is, therefore, a moment of anticipation as well as apprehension for the lotus brigade.

While the BJP is in power in Goa, it is a coalition partner of the ruling Shiromani Akali Dal in Punjab. While there is a glimmer of hope of it returning to power in Goa, Punjab is a tough call. Polling will take place in 157 seats across the two states, including all 117 Assembly berths in Punjab and 40 in Goa.

Goa and Punjab will be the first testing grounds for the BJP government’s much-flaunted demonetisation policy.

A section of top saffron leaders who appeared to have “given up hope” in Punjab also seemed “uncertain” about the outcome in Goa. The RSS, which is closely observing the Goa contest, admitted in its mouthpiece Organiser that the “AAP had made good inroads into the political arena with a team of educated and professional cadre”.

Despite ruling in Goa, all is not well for the BJP in the state. The BJP’s lack of confidence in incumbent chief minister Laxmikant Parsekar was evident as the party refused to project him as its face in the elections.

Though the RSS credited the AAP with making “good inroads” in Goa, its mouthpiece claimed “internal dissent” in the outfit could hit it hard. But there was a note of uncertainty. “Whom does it hurt is the only question,” the Organiser wrote.

A recent opinion poll in Punjab predicted that the Akali-BJP alliance will be “wiped out” in the state. “We don’t have much hope. But there could always be a last-minute miracle,” said a saffron leader who has been campaigning for the party in Punjab, who seemed to be clutching at straws and looking for “divine intervention”. It may be recalled that even during the Narendra Modi wave sweeping the country in 2014, BJP heavyweight Arun Jaitley lost from the Amritsar Lok Sabha seat. “The situation has worsened,” the BJP leader said.

Punjab appears to be a contest between the AAP and the Congress. The drug menace, sacrilege of holy books of Sikhs and the contentious SYL canal issue were the main planks of rival parties. Prime Minister Narendra Modi, Congress vice-president Rahul Gandhi and AAP supremo Arvind Kejriwal led the high-octane campaign in the state, with rallies and meetings. The PM evoked the “surgical strike” and referred to the One-Rank-One-Pension (OROP) scheme. A survey showed Punjab has the highest number of ex-servicemen among the states going to the polls. It has 2,84,401 ex-servicemen, while Uttarakhand has 1,22,649.

On the last day of the campaign, Rahul Gandhi, clad in a white kurta, half jacket and blue denims, tried to reach out to farmers and shared a meal with villagers at Sangrur. He also interacted with farmers in Baliyan village.

While political observers have written off the Akali-BJP combine, some “optimists” in the party hope the Dera Sacha Sauda sect’s last-minute extension of support will come as a major boost. Dera Sacha Sauda, headed by Gurmeet Ram Rahim Singh, has a significant presence in the state’s Malwa region, that has 69 Assembly seats. In the 2007 Assembly polls, the Dera had rallied behind the Congress, which helped it to rout the Akalis in the region.