The Meo Muslim community has, meanwhile, alleged an attempt to cover up the incident. 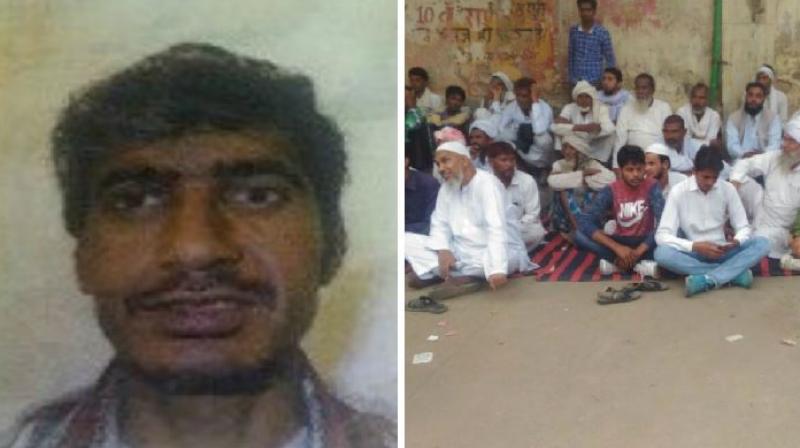 Ummar, 32, died of a bullet wound and his body was found on the railway tracks around 12 km from the Ramgarh police station. (Photo: Asian Age)

Jaipur: A Muslim man, transporting cows in Alwar in Rajasthan, was shot dead allegedly by gau rakshaks on Friday, seven months after a dairy farmer named Pehlu Khan was lynched in a similar incident in the district.

The incident took place in the early hours of Friday. But no FIR has been registered in the case even after two days.

Ummar Khan, Tahir Muhammad and Tahir Khan were transporting cows to Bharatpur when they were waylaid by the mob and assaulted.

Ummar, 32, died of a bullet wound. His body was found on the railway track around 12 km from the Ramgarh police station. His body has been kept in a mortuary. He is survived by his wife and eight children.

The two others got minor injuries and ran away from the scene. Muhammad is being treated at a hospital in Haryana.

He alleged that Ummar was killed by gau rakshaks, who threw his body near a moving train after shooting him. The family members recognised Ummar with the help of his slippers.

The Meo Muslim community has, meanwhile, alleged an attempt to cover up the incident. Several members of the community gathered outside the district hospital in Alwar and demanded action against the cow vigilante groups.

Ummar's relatives filed a complaint against the assailants and alleged that Khan was shot dead by gau rakshkas.

“We won’t accept the body till the case is registered and copy of the FIR is given to us,” said Maulana Hanif, vice president of Jamait-Ul- Rajasthan.

Alleging cover up, Maulana Hanif said that two bullets were shot at Ummar – one in his chest and the other went through his left shoulder but the doctors now say that they can’t trace bullet marks in the body. "To remove evidence, they have disfigured the body," he alleged.

However, the police remained tight-lipped about the incident. Superintendent of Police Rahul Prakash and SHO Govindgarh did not respond to repeated phone calls from Asian Age, while in-charge of the police control room said he has not received any information from the Govindgarh police station about this incident.

The latest incident comes months after Pehlu Khan, the dairy farmer, and at least four others in Alwar were brutally beaten to death by a mob of 15 cow vigilantes from Haryana on April 5. Pehlu Khan was transporting cows in vehicles on the Behror highway in Alwar.

In September, the Rajasthan Police had given a clean chit to six people named in the Pehlu Khan lynching incident.

Following this, his family had sought a court-monitored probe into the killing and said the case must be shifted out of the state.