The CBI apprehended the teen of Ryan International School on Tuesday after questioning 125 students of Class 10, 11 and 12 for many weeks. 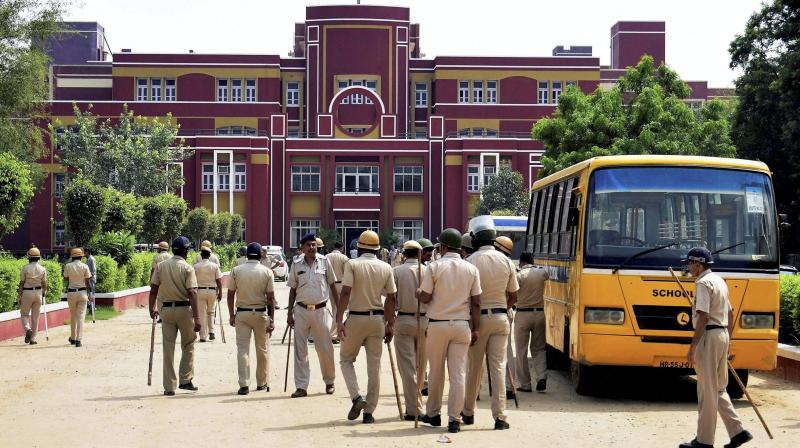 Body of Pradyuman Thakur, with his throat slit, was found in a pool of blood in the toilet of Ryan International School in Gurgaon on September 8. (Photo: PTI/File)

Gurgaon: Questioning of 125 students of Ryan International School in Gurgaon helped the Central Bureau of Investigation (CBI) to identify the prime suspect in the case involving murder of a seven-year-old at the school.

The CBI apprehended the Class 11 student of Ryan International School on Tuesday after questioning 125 students of Class 10, 11 and 12 for several weeks. Parents were also called for every questioning. The investigating agency also collected blood samples of these students, according to a report in NDTV.

"Our children were interrogated at school and they had to provide their blood samples too. A lot of senior students from my child's class were also questioned regarding the murder," Pramod Kamboj, father a student, told NDTV.

Body of Pradyuman Thakur, with his throat slit, was found in a pool of blood in the toilet of Ryan International School in Gurgaon on September 8.

During questioning, it was revealed that the apprehended student was the first to inform the gardener about Pradyuman's body in the toilet. It was also found that the boy was seen carrying a knife two days before the murder. However, the school authorities took no action against the student.

The CBI had apprehended the teen around midnight on Tuesday on the basis of CCTV, forensic and scientific evidence. He was repeatedly questioned before being taken into custody.

According to the agency, the 16-year-old student, believed to be weak in his studies, allegedly slit Pradyuman's throat to get the school to declare a holiday in order to defer a scheduled parent-teacher meeting (PTM) and an examination.

A Gurgaon court on Wednesday sent the accused to the custody of the CBI for three days.

The police had initially arrested a school bus conductor, Ashok Kumar, for the child’s murder.

Kumar had even confessed to the crime, but his family and friends maintained that he was being framed.