In video, group of Kanwariyas run riot in UP, vandalise police van

In a video, the so-called pilgrims can be seen vandalising and smashing the windows of a police van in UP's Bulandshahr. 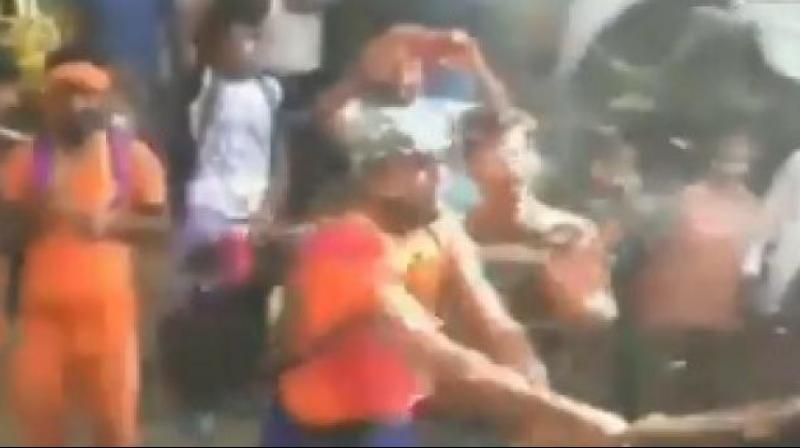 Since the police could not contain the situation they can be seen reversing the car in the footage. (Photo: Twitter | ANI)

Bulandshar: Just a day after a mob of Kanwariya pilgrims vandalised a car in Delhi, another group of pilgrims ran riot after an altercation with locals in Uttar Pradesh's Bulandshahr.

In a video, the so-called pilgrims can be seen vandalising and smashing the windows of a police van in Bulandshahr on August 7.

The Kanwariyas, which were present in large numbers, outnumbered the police personnel. Since the police could not contain the situation they can be seen reversing the car in the footage shared by news agency ANI.

#WATCH: Kanwariyas vandalize police vehicle after an altercation with locals in Bulandshahr on 7th August, police have registered a case. pic.twitter.com/UaIcNU55RV

On Tuesday, over 20 Kanwarias damaged a grey Santro car in west Delhi's Moti Nagar after the car allegedly brushed past one of the devotees.

They even attacked the car with rods and tipped it sideways.

Each year, around this time, scores of devotees from across India commence on the Kanwar pilgrimage on foot on the first day of Hindu month, Saavan.

The devotees of Shiva, these pilgrims walk from their homes to fetch a pot of water from the Ganga. They then offer the Ganga water at their local Lord Shiva temples on Maha Shivratri Day.

However, over the last few years, devotees have faced criticism for their unruly behaviour and hooliganism during the holy journey.