The 55-year-old was shot dead by three unknown gunmen as she entered her home in Bengaluru late Tuesday. 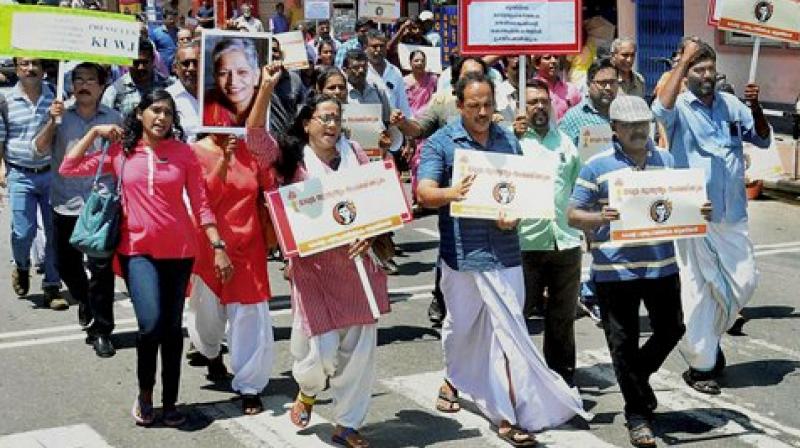 Journalists demonstrate at a protest condemning the killing of journalist Gauri Lankesh, in Thiruvananthapuram. (Photo: PTI)

Mumbai: Activists, politicians and journalists all over India united in grief on Wednesday over the murder of editor and outspoken critic of Hindutva politics Gauri Lankesh, demanding a full investigation into her horrible murder Tuesday evening.

The 55-year-old was shot dead by three unknown gunmen as she entered her home in Bengaluru late Tuesday. Police found Gauri dead on her front porch. No arrests have been made yet.

She was given the full honour of a state funeral in presence of CM Siddaramaiah. 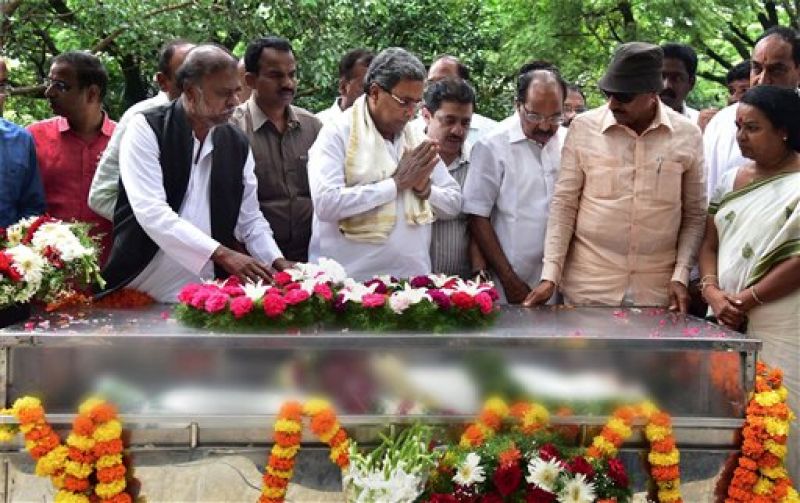 The Editors Guild of India said her death was "an ominous portent for dissent in democracy and a brutal assault on the freedom of the press", calling for a swift and thorough investigation.

Lankesh was a target of right-wing trolling on social media and had complained of facing "rabid hate" that made her fear for free speech in India.

Journalists took out a march from the Press Club to the Vidhana Soudha, the state secretariat, and submitted a memorandum to Chief Minister Siddaramaiah seeking immediate action to bring the culprits to book.

"We strongly believe that such silencing methods are an attempt of divisive forces in a democratic system to stifle the media," the memorandum said.

Condemning the killing, Press Club of Bengaluru president Sadashiva Shenoy said he was closely associated with Gauri Lankesh and was at loss of words to condole her death.

He said the Press Club of Bengaluru will form a committee to mount pressure on the government for speedy investigation.

"We demand that a judicial committee be constituted, headed by a sitting High Court judge, to probe the brutal killing," Shenoy said.

Freedom fighter 99-year-old H S Doreswamy led a protest at the Town Hall, where hundreds of people turned up to condole the death and express their anger at the murder.

The body of Gauri Lankesh was kept at the Ravindra Kalakshetra here where mourners paid their last respects.

In Delhi, prominent journalists gathered at the Press Club and demanded justice amid a call for standing up to "forces" trying to the "muzzle" the voices of dissent.

Author and senior journalist Paranjoy Guha Thakurta termed Tuesday's killing of Lankesh in Bengaluru as "a defining moment" in the history of Indian media.

"We are seeing the space for free-thinking shrinking. They want to silence the people who want to hold truth to power. We cannot remain silent, because that is what they want. Don't keep quiet. That would be their success," he said.

The Press Club of India (PCI) had yesterday strongly condemned the killing, saying, “A fearless and independent journalist who gave voice to many causes and always stood up for justice has been shot dead in the most brutal manner in order to silence her voice."

The Club has demanded the attackers be identified and brought to book in a swift manner.

"What is wrong in being a journalist and also an activist or vice-versa," Thakurta asked.

"There was a criminal defamation case against Lankesh. Why was Gauri targeted for the same story that was published by several others? At this defining moment in the right to free speech, we cannot forget Gauri, if we do, their objective would be served," he said.

Meanwhile, the Kerala Union of Working Journalists (KUWJ) also staged a protest at the Jantar Mantar.

The Delhi unit of the forum said the killing of senior Kannada journalist was an example of "politics of intolerance".

The KUWJ also said it is an "attempt" to muzzle the voices of criticisms. "She was not only a journalist but a social activist who shared the concerns of the society. This murder is similar to the killings of M M Kalburgi, Narendra Dabholkar and Govind Pansare," KUWJ said in a statement.

The media in Hyderabad demanded immediate arrest of the culprits. Under the aegis of Press Club Hyderabad, a group of journalists raised slogans condemning Lankesh's killing.

Holding placards that read: 'I AM ALSO GAURI', 'You cannot curtail freedom of expression through murder', the journalists also participated in a march from the Press Club to Khairtabad Circle.

The media also demanded the guilty be arrested as early as possible.

At the Thiruvananthapuram Press club, journalists paid floral tributes in front of the portrait of the veteran journalist and lit candles. Later, a condolence meeting was also organised.

In Chennai, journalists and political parties condemned the brutal murder.

"This incident has shocked the entire country and has once against raised questions on safety of journalists in India," the Chennai Press Club said.

"The manner in which Gauri Lankesh was killed shows it was a planned execution. Chennai Press Club urges the Government of Karnataka to arrest those who are responsible for this murder," the statement said.

Madras Union of Journalists also strongly condemned the killing and wanted the assailants to be arrested at the earliest.

Journalists also held a protest. They held placards that read: "Murder of democracy" and "Tomorrow it could be one of us".

Amnesty International India said the killing of Gauri Lankesh "raises alarm" about the state of freedom of expression in the country.

Gauri, who was known for her strident anti-establishment views and writings against Hindu fundamentalists, was never afraid of speaking truth to power, the rights body said.

"Her assassination must be thoroughly investigated and the perpetrators brought to justice. The police must investigate whether she was killed because of her journalism," Asmita Basu, Programmes Director at Amnesty International India, said.

Gauri was the editor of Gauri Lankesh Patrike, a Kannada weekly. She was widely regarded as an independent and outspoken journalist and activist, and a fierce critic of hardline Hindu groups in Karnataka.

"Critical journalists and activists have increasingly faced threats and attacks across India in recent years. State governments must act to protect those whose voices of dissent are being silenced," Basu said.

The Committee to Protect Journalists has said there have been no convictions in any of the 27 cases of journalists "murdered for their work" in India since 1992, the statement said.

Condemning the murder of senior journalist Gauri Lankesh, the Indian Writers' Forum today pledged to continue her fight against the "haters of free speech and a plural India".

A statement from the forum described Lankesh, who was killed at her home in Bengaluru yesterday, as a "voice of dissent, a voice of reason" who was "silenced with guns".

"The forum condemns the continued unmaking of India in which writers, artists, scholars, rationalists -- and indeed any citizen who exercises her right to speak freely -- is no longer safe.

"We will continue to speak on her behalf and ours. They cannot silence us all," the statement read.

It termed the murder of the 55-year-old journalist "a chilling continuation" of the series of killings of rationalists, writers, scholars and activists like Narendra Dabholkar, Govind Pansare and M M Kalburgi.

"None of the murderers has been punished, though much points to the extended right wing family. Instead, the punishment of critic voices continues, as do attacks on Muslims, dalits, adivasis and women -- Indian citizens all."

The Forum remembered Lankesh as a person who performed her duties as journalist and a citizen with "uncompromising honesty".

"She was guided by democratic, secular values, that insist on an India in which speaking up against division and hatred is every citizen's right," it said.

In April, Reporters Without Borders ranked India 136th of 180 countries in its world press freedom ratings, blaming "Hindu nationalists trying to purge all manifestations of 'anti-national' thought from the national debate".

Last year, Gauri Lankesh was found guilty of defaming a BJP lawmaker in a 2008 article about alleged corruption. She was appealing against the conviction.

"The murder must be investigated effectively and with urgency," the All India Democratic Women's Association said in a statement.

Lankesh's murder was a "grim indicator of the intolerance and violence that have been let loose by the increasing influence of right wing forces in the country", it added.

"Dissent, engaging with criticism, are strengths of a democracy, but in India, they are being drowned by allegations of causing offence to faith or nation," she told AFP.

Colleagues, activists and friends gathered in cities around the country on Wednesday to protest Lankesh's death and demand justice.