BJP chief Amit Shah said the step (NRC) has been taken for protecting the rights of the people of Assam, India. 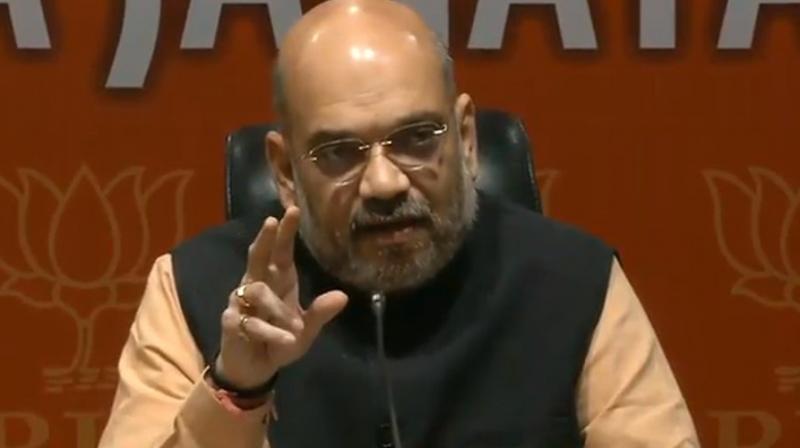 BJP chief Amit Shah also said no Indian should be worried about Assam's NRC, asserting that names of genuine citizens will not be deleted. (Photo: Twitter | @BJP4India)

New Delhi: BJP president Amit Shah on Tuesday accused the Opposition of doing vote-bank politics on the issue of Assam NRC and demanded that all political parties must clarify their stand on illegal immigrants in Assam.

Addressing a press conference, Shah said, “If you talk about human rights, what about the rights of people of Assam? Their rights of education, jobs were being taken away.”

“This step (NRC) has been taken for protecting the rights of the people of India,” he added.

Shah also charged the UPA governments of not showing the courage to identify and deport illegal immigrants from Assam as per an accord which was signed by erstwhile Prime Minister late Rajiv Gandhi in 1985.

The BJP chief added: “By overlooking the National Register of Citizens (NRC) draft in 2005, the Congress underplayed the safety and security of the Indian citizens just to "play vote-bank politics."

Further attacking the Congress, Shah asked how the party can question the draft when they introduced it in 2005.

The BJP chief said that it is the Prime Minister Narendra Modi-led NDA government which continued working on the draft.

"There was a PIL filed by the citizens of Assam in the Supreme Court, following which, there was a time-bound programme on which, the NDA Government under Narendra Modi started working on it. The draft has, finally, been presented to the people of Assam, in which, 40 lakh people have been deemed ineligible. Moreover, the order was pronounced by the Supreme Court and not the Government," Shah emphasised.

Shah also said no Indian should be worried about Assam's NRC, asserting that names of genuine citizens will not be deleted.

"NRC was at the heart of the Assam Accord. No Indian citizen should be worried about the NRC. For us, NRC is key to the security of the country," he assured.

The NRC draft, which was released on Monday, has left out nearly 40 lakh people in Assam incorporating names of 2.89 crore people out of 3.29 crore applicants. The list has been updated for the first time since 1951, to account for illegal migration from nearby Bangladesh.

Also Read: 40 lakh left out of draft list of NRC in Assam, no threat of deportation

The opposition parties, including, the Congress have been vociferous against the draft. Congress president Rahul Gandhi, on Monday, took to Twitter to criticise the draft and said the "execution of the critical and highly sensitive exercise is tardy".