In an open letter to Narendra Modi, 114 veterans of Army also condemned clampdowns on free speech. 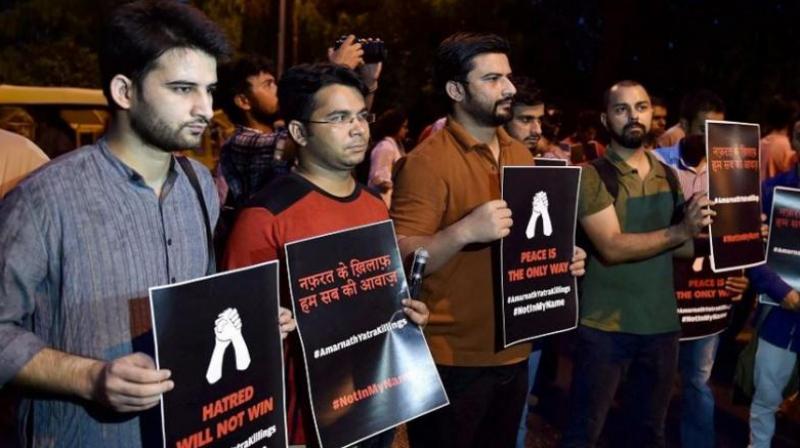 The campaign called 'Not In My Name' was sparked after a teenage Muslim boy was killed by a mob, on a train near Delhi, who accused him of being a 'beef-eater'. (Photo: PTI)

New Delhi: The recent attacks on Dalits and the Muslim community in the country is drawing flak from people from all walks of life. Condemning the recent spate of attacks, a group of 114 veterans of the Indian Armed Forces have penned an open letter to Prime Minister Narendra Modi.

Voicing concern over the recent incidents, the Army veterans said “what is happening in our country today strikes at all that the Armed Forces, and indeed our Constitution, stand for. We are witness to unprecedented attacks on society at large by the relentless vigilantism of self-appointed protectors of Hinduism.”

They also condemned the clampdowns on free speech by attacks on media outlets, civil society groups, universities, journalists and scholars, through a campaign of branding them anti-national and unleashing violence against them while the State looks away.

The veterans have clarified that they do not hold affiliation with any political party. They said they stand with the ‘Not in My Name’ campaign that mobilised thousands of citizens across the country to protest against the current climate of fear, intimidation, hate and suspicion.

In the letter, the veterans expressed their distress and said, “It saddens us to write this letter, but current events in India have compelled us to register our dismay at the divisiveness that is gripping our country.”

Stating that the Armed forces stand for ‘Unity in Diversity’, the letter signed by veteran Armed force personnel to the Prime Minister further mentioned, “Differences in religion, language, caste, culture or any other marker of belonging have not mattered to the cohesion of the Armed Forces, and servicemen of different backgrounds have fought shoulder to shoulder in the defence of our nation, as they continue to do today.”

It further said, “Throughout our service, a sense of openness, justice and fair play guided our actions. We are one family. Our heritage is like the multi-coloured quilt that is India, and we cherish this vibrant diversity.”

The letter by Armed force veterans said, “We urge the powers that be at the Centre and in the States to take note of our concerns and urgently act to uphold our Constitution, both in letter and in spirit.”

The letter comes a month after scores of people took to streets in various cities to protest against a rise in mob lynching. The campaign called 'Not In My Name' was sparked after a teenage Muslim boy was killed by a mob, on a train near Delhi, who accused him of being a 'beef-eater'.

Prime Minister has also condemned the killings, saying, "Killing people in the name of Gau Bhakti (reverence of cows) is not acceptable."