One in 15 individuals exposed to COVID-19 by August: ICMR survey

According to ICMR, this shows that a considerable population is still susceptible to COVID-19. 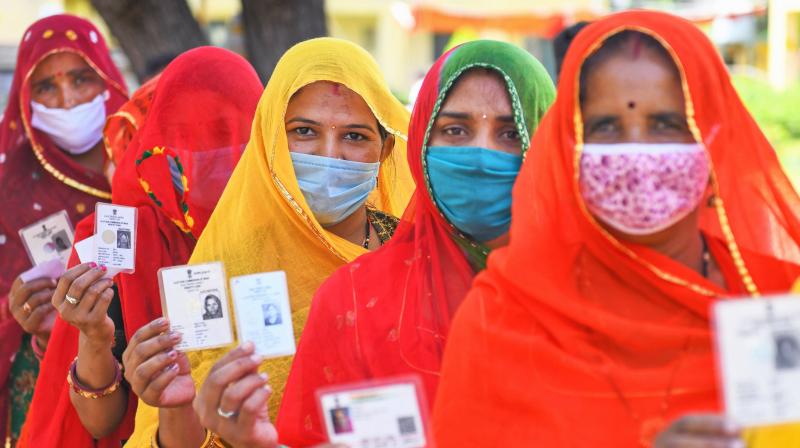 Women wait in long queues to cast their vote at a polling station during Panchayati Raj elections, amid the ongoing coronavirus pandemic, at Jhala ki Chauki village near Beawar, Monday, Sept. 28, 2020. (PTI Photo)

New Delhi: One in 15 individuals, aged 10 years and above, are estimated to have been exposed to SARS-CoV2 by August 2020, the second sero-survey conducted by ICMR has found. According to ICMR, this shows that a considerable population is still susceptible to COVID-19.

Dr Bhargava added that though lockdown, containment and behavioral change at population level have managed to check the potential spread of SARS-CoV2, the survey findings show that about 90 per cent of the population is still vulnerable.

The second sero-survey was conducted in the same 700 villages and wards from 70 districts from 21 states which were covered during the first survey. The first sero-survey of May 2020 revealed that the nationwide prevalence of novel coronavirus infection was only 0.73%. The second survey further showed that there is a lower infection to case ratio in August compared to May which reflects a substantial increase in testing and detection across India.

Meanwhile, Union health secretary Mr Rajesh Bhushan said considerable decline has been noted in states like Maharashtra, Karnataka, Uttar Pradesh but in Kerala cases are on the rise.

The health secretary also said that the government does not agree to the Rs 80,000 crore figures put out by Serum Institute of India for the Covid-19 vaccines, saying: “We have calculated the amount required in the meetings and currently, that amount is available with the government.” He added that a panel of experts on vaccine administration has met five times to work out the modalities.