India   All India  30 Aug 2019  Tough times in Srinagar: How jawans are coping
India, All India

Tough times in Srinagar: How jawans are coping

The security forces also find themselves in a difficult situation because of the communications blockade in the Valley. 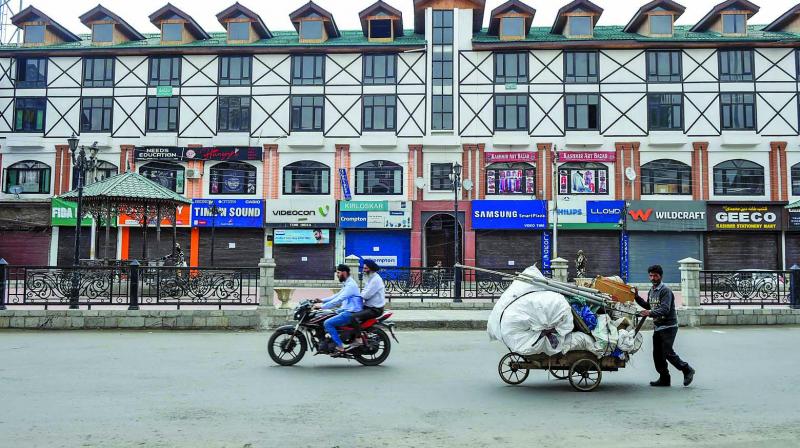 Srinagar: “Tum Lal Chowk kyon gaye thay (Why had you gone to Lal Chowk)?” The query from a man in combat dress baffled me, rather I felt hurt. I asked myself: “Why should anyone, and that too an “outsider”, ask me about the purpose of visiting a place in a town where I was born and have lived for decades?”

The young man who posed this question was part of a posse of CRPF jawans manning a makeshift checkpoint next to a pillbox along a road that passes through central Srinagar, often referred to as “downtown” in Kashmir’s warped jargon.

It was 9.30 pm and I was driving home after a hectic day at work. After two of the security personnel, one of them holing a gun and the other a powerful torch, thoroughly searched my car, a third one noted its registration number in a notebook and then asked me: “Kahan sey aa rahe ho, aur kahan jana hai (Where are you coming from, and where are you going)?” I then replied: “I was at Lal Chowk (the city centre) and am returning to my home.”

Then came the outlandish query from the jawan. “Tum Lal Chowk kyon gaye thay”.  I didn’t reply, but I showed him my identity card. I was also carrying a “movement pass for Section 144 CrPC restrictions” with me, but no such curbs were in force in that area. After satisfying himself about my credentials, he allowed me to move on.

The next morning, while heading for Mushtaq Press Enclave, Kashmir’s media hub situated in the Lal Chowk area, I found the drop-gate I was stopped at the previous night had been removed, apparently to facilitate smooth vehicular traffic. But half a dozen CRPF jawans in riot gear were standing outside the wayside sandbag pillbox. There were possibly four to six more inside it.

I decided to meet the jawan who had upset me the previous night again. However, I was told the posse he was part of had been replaced by another one for daytime duty. “They were here for night duty,” said an officer who introduced himself as ASI Ravi. After getting somewhat friendly, I told him about the preceding night’s episode. “Kiya karein Sahib... kabhi kabhi pochna padta hai (What can we do, Sir... Sometimes, we need to ask such questions).” He, however, quickly added: “All of us are not like him.”

The security forces also find themselves in a difficult situation because of the communications blockade in the Valley. They are unable to stay in touch with their families back home. This, according to Ravi, is “frustrating at times”.

Many parts of Srinagar remain under security curbs since August 5, when Jammu and Kashmir was stripped of its special status under Article 370 of the Constitutions and split into two Union territories.

Even after the lapse of 25 days, tensions are still high and the anger among residents appears incessant, that seems borne out by the fact that a spontaneous strike has shut marketplaces, public transport is off the roads and the schools reopened by the authorities see hardly any students arriving to attend classes.

These are tough times in Kashmir. At first light, the security forces, mainly from the CRPF and other Central armed police forces, take a quick breakfast to fuel their day at their command centres and buildings and spaces requisitioned as temporary barracks to accommodate thousands of additional personnel. The reinforcements were rushed in days before Union home minister Amit Shah moved a resolution in Lok Sabha for abrogation of Article 370 and a bill for splitting the state into two UTs on August 5.

No morning walks or aerobics and no formal roll calls. At first light, the security personnel are quickly transported to various areas of Srinagar in buses whose side windows have been covered with tin-sheets to protect them from being hurt in stone-pelting. Some of them travel in “bunker” vehicles and one-tonners which have been turned into virtual cage armours to escape stone-pelting en route or while being at the “hot spots”.

By 7 am, the men in special combat uniforms, equipped with riot gear and holding assault rifles, pellet and teargas guns are deployed in their respective duty areas. Some of them — in ones or twos — stand guard at vintage points and at openings of alleyways. Others begin vigilantly walking in two lines through labyrinth-like streets.

They remain deployed in these areas till sunset. It is often at the time of their withdrawing from these areas and boarding their vehicles for being transported back to their barracks that they come under stone-pelting by irate crowds of youth. The security forces respond by firing teargas canisters and, occasionally, pellet shotguns.

The residents who spoke to this newspaper said that unlike in the past, they found the security forces exercising restraint while dealing with stone-pelting mobs this time. However, there have been complaints of the security forces using slingshots to throw stones at residential houses at places, damaging window panes at times. Residents of Srinagar’s  Anchar and Telbal had earlier this month accused the J&K police and Central armed police of indulging in vandalism, breaking into residential houses or damaging their window panes, attacking stationary cars and thrashing and arresting even the people who were are not part of any protests or stone-pelting crowds.

Between 7 pm and 10 pm, the Central armed police, assisted by the local police, man makeshift checkpoints and drop-dates on main roads and city intersections. After 10 pm, they prefer to stay inside sandbagged bunkers and pillboxes, the number of which has gone up considerably in the past weeks, not only across Srinagar but also in other major towns of the Valley.

There are no mobile kitchen vans in use to cater for timely supply of fresh meals to the jawans out in the field. Tiffins are, however, sent to them usually in one-tonners but when stone-pelting is on and roads and streets en route are overwhelmed by protesters, the authorities avoid doing it. In such situations, they survive on water and are able to eat only when they are back at their company headquarters late evenings. At least, Srinagar has seen fewer such situations this time, compared to the unrest of 2008, 2009, 2010 and 2016.