India   All India  30 Jun 2018  Only 1 militant killed, 2 others escaped during encounter in J&K's Pulwama
India, All India

Only 1 militant killed, 2 others escaped during encounter in J&K's Pulwama

Earlier, officials had claimed that all the 3 militants were killed during the Pulwama encounter. 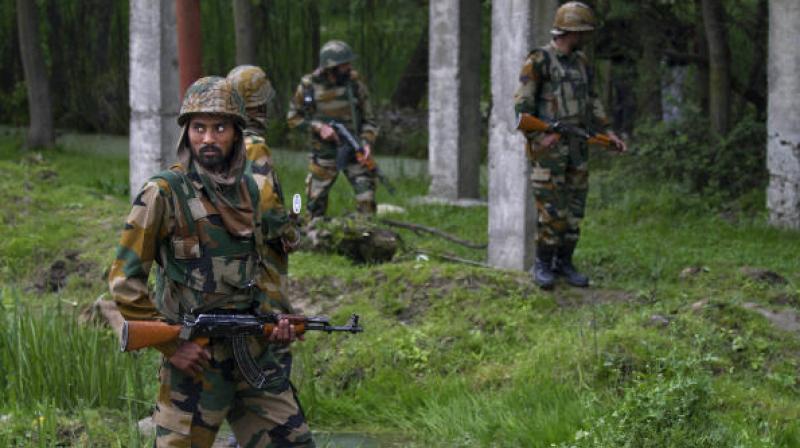 It is now learnt that only one militant was killed whereas two others managed to escape from the area. (Representational Image | AFP)

Srinagar: In a major embarrassment to the security forces’ authorities, two of the three militants trapped inside a private house during a search operation in a remote village of Jammu and Kashmir’s southern Pulwama district on Friday managed to escape.

The officials had claimed that all the three were killed in a gunfight with the security forces during the operation and that their identities are being ascertained. Director General of Police, Shesh Paul Vaid, had tweeted on Friday evening, “All three militants killed, Good job boys."

It is now learnt that only one militant was killed whereas two others managed to escape from the area. Confirming it, a statement issued by the police here on Saturday said, “A lone body (that) of a terrorist was recovered. Apparently the other terrorists hiding (in the house) managed to escape from the spot after making indiscriminate fire around the site of encounter”(sic). The police claimed that the militants had initially taken few civilians hostage inside the house where they had been holed up. “They were, however, evacuated by the security forces,” it said.

The gun fight broke out after the security forces including Army’s 55 Rashtriya Rifles, the J&K police’s counterinsurgency Special Operations Group (SOG) and the Central Reserve Police Force (CRPF) laid siege to Thumna village in Chatpora area of southern Pulwama districy following inputs about the presence of militants there.

The police has identified the slain militant as Lashkar-e-Taiba (LeT)’s Sajad Ahmed Shah, a resident of frontier district of Kupwara. “He was involved in number of attacks on the security establishments and civilian atrocities. Rifle and ammunition were also seized from the site of encounter,” the police said.

The area also witnessed protests by surging crowds which made repeated attempts to relocate to the encounter site while chanting pro-freedom slogans apparently to encourage militants holed up in a private house.

A teenager Faizan Ahmed Poswal was killed and several other civilians were injured when the security forces fired lived ammunition to quell protesters and stone-pelting mobs, the police sources and witnesses said.