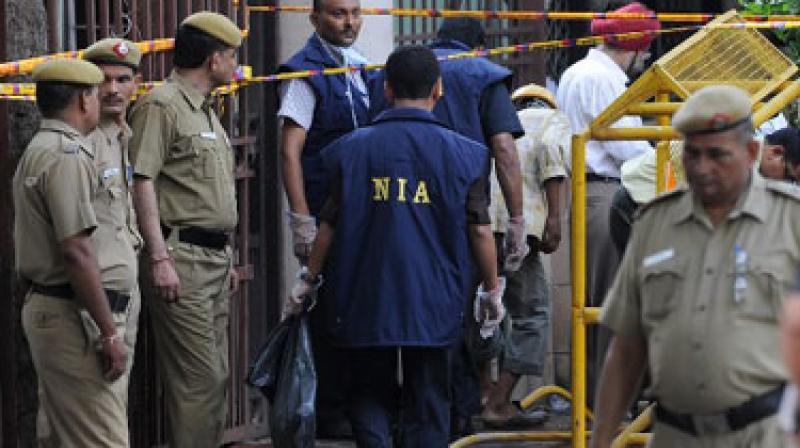 A staff of English daily ‘Greater Kashmir’ said that the NIA sleuths, who were accompanied by the members of the Central Reserve Police Force (CRPF) and local policemen, seized some of the newspaper accounts records and hard-disks, It also obtained bank accounts details of employees, including former executive editor Zahiruddin and another journalist Pervez Bukhari, and a medical and humanitarian trust run by the newspaper.

He said the raiding party arrived at the newspaper office in Srinagar’s Mushtaq Press Enclave at around 6 am and called its editor and owner Fayaz Ahmad Kaloo and chief manager Rashid Makhdoomi on the phone, asking them to reach the premises immediately.

The other places where raids were conducted include the homes and offices of prominent human rights activist Khurram Parvez, journalists Zahiruddin and Pervez Bukhari, Hurriyat Conference activist Muhammad Yusuf Sofi (in Brar area of northern Bandipore district), the office of NGO ‘Athrout’ and residences of its office bearers Bashir Ahmad Wani and Parvaiz Ahmad Matta.

An official of the NIA who spoke on condition of anonymity said that the raids at Greater Kashmir office and the homes of some journalists were not in connection with their journalistic work and other professional pursuits but a case pertaining to alleged misuse of foreign contributions registered by the agency earlier this month.

NIA in a statement issued later in the day said that it conducted searches at ten locations in Srinagar and Bandipora and one location in Bangaluru “in connection with a case pertaining to certain so-called NGOs and trusts raising funds in India and abroad in the name of charitable activities and then using those funds for carrying out secessionist and separatist activities in J-K.”

The NIA said it registered a case on October 8 under sections 120B and 124 A IPC and sections 17, 18, 22A, 22C, 38, 39 and 40 of Unlawful Activities (Prevention) Act, 1967 after receiving credible information that certain NGOs and trusts are collecting funds domestically and abroad through so-called donations and business contributions and utilising them for secessionist and terrorist activities in J-K.

The NIA claimed seizing “several incriminating documents and electronic devices” during these raids and said that further investigation in the case is underway.

The raids, however, evoked sharp criticism from different quarters in Kashmir whereas some social media users described these as an attempt to ‘scare and harass’ those who refuse  to fall in line with Indian narrative on Kashmir.

Former chief minister and People’s Democratic Party leader Mehbooba Mufti tweeted, “At a time when J-K’s land & resources are being plundered, GOI wants media publications to write op-eds about diabetes & yoga. In BJP’s ‘all is well’ charade, truth is the biggest casualty. Any journalist unwilling to become a part of Godi media is targeted.”

Senior PDP leader and former minister Naeem Akhtar alleged that the BJP government may also use the series of “harsh and undemocratic and unconstitutional steps” and “vandalising” J-K’s “unique identity and culture” since August 5, 2019 for election gains in Bihar as the party “has always tried to flourish on anti Muslim and anti minority diatribe.”