Gandhi also alleged that the 'One-Rank, One-Pension' scheme has not been implemented so far and PM was speaking 'lies' on issue. 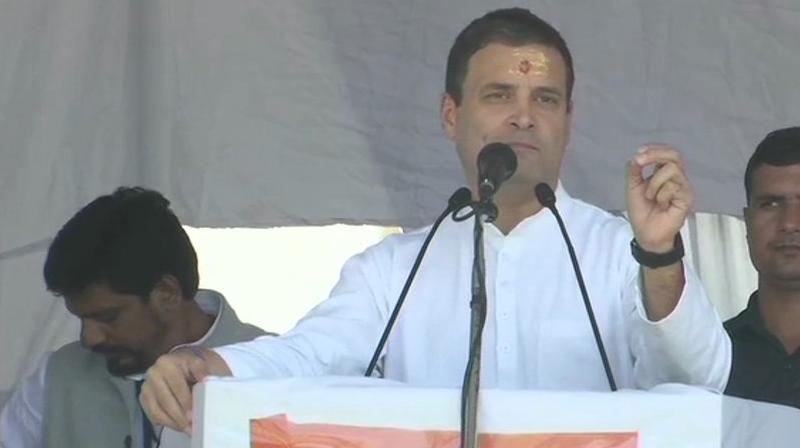 Gandhi said a couple of days back, a delegation of ex- servicemen met him and said they had trusted Modi over OROP but 'disappointed' now. (Photo: ANI | Twitter)

Ujjain (MP): Congress President Rahul Gandhi on Monday said Prime Minister Narendra Modi had made "mistakes" on Jammu and Kashmir, as a result of which the state is "on fire".

Addressing a public meeting here, Gandhi also alleged that the 'One-Rank, One-Pension' scheme has not been implemented so far and the prime minister was speaking "lies" on the issue.

He said a couple of days back, a delegation of ex- servicemen met him and said they had trusted Modi over OROP but were "disappointed" now.

The prime minister "claims that OROP has been implemented. He speaks lies. OROP has not been implemented so far. Modi ji claims but ex-servicemen said it was not executed," the Congress leader said.

Referring to Jammu and Kashmir, he said the state is "on fire" right now, apparently referring to the latest killings in the state by the terrorists.

The Modi government "opened the doors of J&K for terrorists. No politician was martyred in J&K but army men are laying their lives there because of Narendra Modi's mistakes," Gandhi said.

"The Prime Minister talks about surgical strike, Army, Navy but doesn't talk about army men. He makes claims. At least, tell us what you did about those who carried out the surgical strike (of September 2016)," he said.

Taking a jibe at Modi for his remark that "selling of pakoda is also a job", Gandhi said, "If you fry pakodas, then BJP will take away the money of the oil. Moreover, it will eat fried pakodas."

"Mallya had a meeting for 40 minutes with Arun Jaitley before leaving the country. FM has the government agencies under him and he could have informed him," Gandhi said.

Jaitley has already rubbished the allegations.