Sena MP wrote to Ministry in 2015 raising issue of the foot overbridge being narrow and incapable of bearing rush hour crowd. 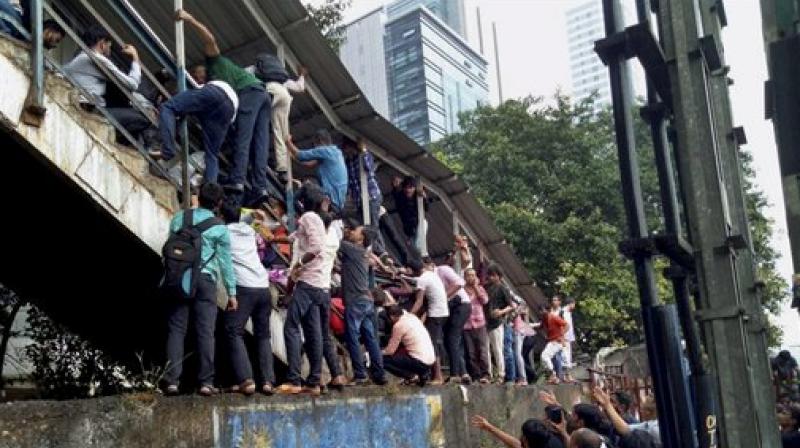 At least 22 people were killed and 39 injured in a rush hour stampede on a narrow foot overbridge (FOB) linking Elphinstone Road and Parel suburban stations during heavy rain on Friday morning. (Photo: PTI)

Mumbai: The Ministry of Railways was warned that the Parel-Elphinstone foot overbridge was not wide enough to handle rush-hour crowds.

Anticipating the stampede or accident to happen two Members of Parliament of Shiv Sena, Arvind Sawant and Rahul Shewale had written to the Ministry of Railways in 2015, two years before Friday's stampede at Elphinstone Road foot overbridge.

The Shiv Sena MPs had raised the issue of the foot overbridge at Elphinstone Road being narrow and incapable of bearing the burden of passenger footfall during rush hours.

They had requested the Ministry of Railways that a new 12-metre wide foot overbridge be constructed at Elphinstone Road station to connect the Western Railway station to Central Railway's Parel.

The then Railways Minister, Suresh Prabhu responded to the Shiv Sena MP's letter saying the Indian Railways was facing one of its toughest years due to adverse effects of global slowdown.

"The needs and aspirations of the people are brought to our notice through the various requests and representations sent by you as a Member of Parliament. Most of the requests which are received reflect the genuine needs and demands of the people and it is always our endeavour to agree to as many requests as possible. However, sometimes due to the paucity of finances, operational constraints or other compelling circumstances agreeing to the request may not be possible," Prabhu wrote. 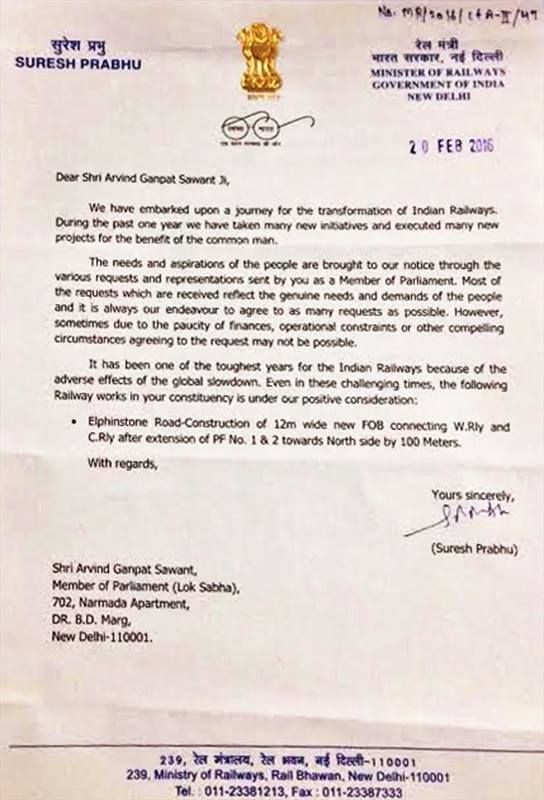 Failing to deny directly, Prabhu the then Railways Minister added that "even in these challenging times the following Railway works (Elphinstone Road-construction of 12m wide new FOB connecting W.Rly and C.Rly after extension of PF No. 1 & 2 towards North side by Meters) in your constituency is under our positive considerations."

At least 22 people were killed and 39 injured in a rush hour stampede on a narrow foot overbridge (FOB) linking Elphinstone Road and Parel suburban stations during heavy rain on Friday morning. Some of the injured are admitted at KEM hospital.