Sneak attack was carried out hours after security forces had gunned down top commander of Hib-ul-Mujahideen and his accomplice in Anantnag. 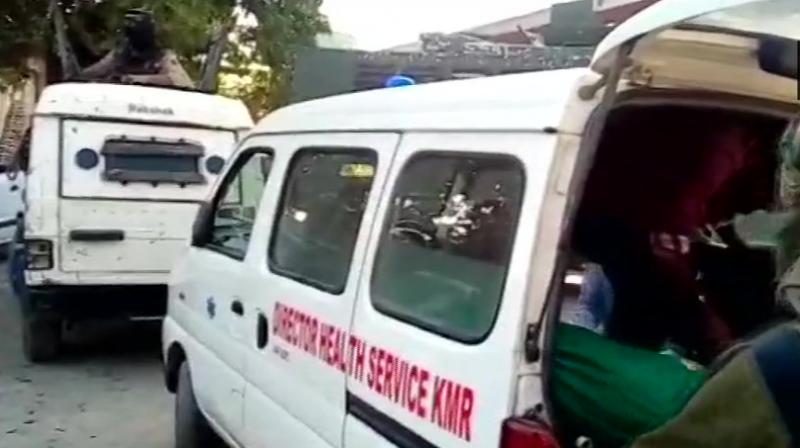 Four policemen on board the vehicle were injured. They were rushed to a nearby hospital where all of them succumbed, the officials said. (Photo: Twitter | ANi)

Srinagar: Four policemen were killed in a militant attack in Jammu and Kashmir’s southern Shopian town on Wednesday afternoon.

The sneak attack was carried out hours after the security forces had gunned down a top commander of Hizb-ul-Mujahideen Altaf Ahmed Dar alias Altaf Kachroo alias Moin and his accomplice Umar Rashid Wani during a gunfight in neighbouring Anantnag district.

The police and witnesses said that the militants targeted the escort vehicle of Deputy Superintendent of Police (headquarters), Shopian with their AK 47 assault rifles in Shopian’s Arahom area apparently in reprisal to the killing of the Hizb commander.

The official said that four policemen on board the vehicle were injured in the attack. They were immediately rushed to the district hospital where three of them were declared brought dead. The fourth policeman succumbed to his injuries soon thereafter, the hospital sources said.

The slain policemen have been identified as Constables Ishfaq Ahmed Mir, Javaid Ahmad Bhat, Mohammad Iqbal Mir and SPO Adil Manzoor Bhat. In the evening, a wreath-laying ceremony was held in the Shopian district police lines at which senior police officers including DGP Shesh Paul Vaid paid tributes to the slain policemen.

A report said that the assailants decamped with the service weapons of the policemen and then disappeared in the neighbourhood. The police sources said that the escort party had gone to the area to get a police vehicle repaired at a local motor workshop.

A massive search operation was immediately launched by the security forces in the area to catch the assailants dead or alive, the sources said.

Jaish-e-Muhammad claimed responsibility for the attack and said its cadres along with those of the Hizb killed the policemen.

Some police officials said it could be an ‘act of vengeance’ as it came hours after the security forces had killed two Hizb militants during a gunfight in Muniward village of Khanabal area in neighbouring Anantnag. However, DGP S P Vaid said, “It would be too early to say that.”

The killing of militant duo sparked off massive protests in parts of south Kashmir during which the security forces burst teargas canisters and fired pellet shotguns to quell stone-pelting mobs, reports said.

Scores of protesters and security forces personnel were injured in these clashes at several places in Anantnag and Kulgam districts. The worst incidents were reported from Qoimoh area of Kulgam where, the hospital sources said, as many as 73 people were injured including five of them receiving pellet injuries.

In view of growing tensions and street protests, the authorities suspended train services between Baramulla in north-western Valley and Banihal town across the Pirpanjal range in Jammu region and withdrew internet facilities in south Kashmir. Also, curfew-like restrictions were being enforced in Anantnag town and some other parts of south Kashmir as reports last came in.

The police officials said that slain Hizb commander Altaf Kachroo carried a cash reward of Rs 15 lakhs on his head. They termed his killing as a major success in the anti militancy operations in the Valley.

The officials said that the encounter started at around 5 am on Wednesday after the security forces including the Army, the counterinsurgency Special Operations Group (SOG) of the J&K police and the Central Reserve Police Force (CRPF) laid siege to the area on inputs about the presence of militants.

During the cordon-and-search operation, the militants hiding in a private house opened fire on the search party, triggering the encounter which ended after several hours with the killing of the militant duo, a police spokesperson said.

DGP Vaid announced the killing of the holed up militants in a tweet which read, “Anantnag encounter completed, 2 bodies of terrorists along with 2 weapons recovered from the site. A clean operation with precision”.

The police said that Altaf Kachro, a resident of Kulgam’s Hawoora, Mishipora area was currently operating as one of the most important militant commanders of the Hizb. “He had a long history of criminal records since 2007. Considered as a long time surviving militant in the area, he was involved in series of militant crimes including attacks on the security forces and killings of civilians and policemen in the area,” the police spokesman said.

He added that several cases stood registered against Altaf Kachroo in different police stations across the Valley for his terror activities. “Pertinently during the 2016 unrest he along with Yasin Itoo alias Gaznavi played a major role in instigating people,” the spokesman said.

The police said that the second slain militant Umar Rashid Wani, a resident of Khudwani area of Kulgam, became active last year. “He was involved in many civilian atrocities and attacks on security establishments,” it said adding that Wani had escaped the security dragnet after carrying out an attack on the CRPF in Srinagar’s Batamaloo area in July. One CRPF jawan was killed and two others were injured in this attack.

Earlier Tuesday night, gunmen attacked the residence of a Bharatiya Janata Party (BJP) leader Avatar Singh in Tral area of south Kashmir's Pulwama district. The police said the gunmen believed to be militants fired upon the house of the BJP leader in Monghama village of Tral. Singh was not present at his home at the time of the attack as he is currently putting up in Srinagar under police security.

Separately, an alert was sounded in frontier district of Poonch on Wednesday after a policeman’s service rifle went missing. The police sources said that an AK-47 rifle with a magazine of a policeman posted as PSO to a DySP rank officer went missing on the intervening night of August 26 and 27 from police lines Poonch.