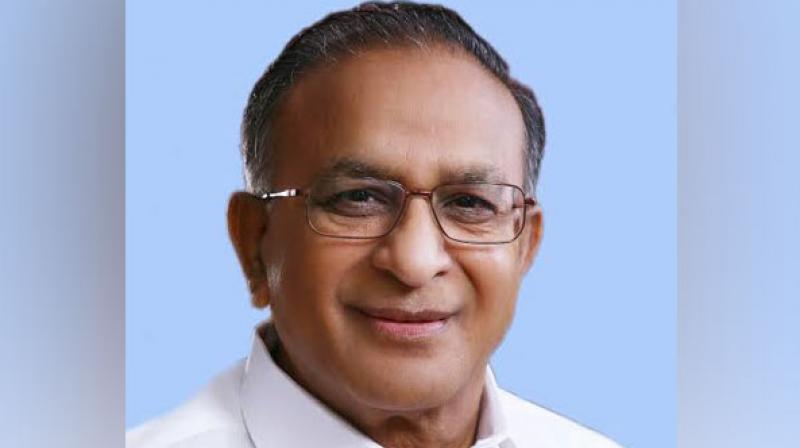 Hyderabad: Former Union minister and Congress leader S. Jaipal Reddy, known for his probity and the staunchness of his beliefs, died early on Monday morning. He was 77. He is survived by his wife Lakshmi Reddy, two sons and a daughter. None of them is in politics.

He was recently diagnosed with pneumonia and admitted to a hospital where he died at 1.28 am.

The news was received with shock and leaders from all political parties visited his house to pay their respects even as tributes poured in from President Ram Nath Kovind who called him “a thinking person’s politician and outstanding parliamentarian”. In his tribute, Prime Minister Narendra Modi remembered Jaipal Reddy as an articulate speaker and effective administrator.

Jaipal Reddy, who began his political career as a student of Osmania University, joined the Congress, shifted to the Janata Party during the Emergency and returned to the Congress later.

He served five terms as a Lok Sabha member, two terms in the Rajya Sabha and won four Assembly elections in a high-profile political career. He sat out the recent elections due to his age and health concerns.

He was as much remembered for being a staunch supporter of Telangana statehood as for contesting against Indira Gandhi from the Medak Lok Sabha seat on a Janata Party ticket and for levying a fine on Reliance Industries as Union petroleum minister.

A doughty fighter, Jaipal Reddy never left his limited mobility due to polio, which he contracted when he was 18 months old, stop him from achieving political heights. Thanks to his exceptional oratorical skills and articulation, he was the spokesperson for the United Front and National Front governments and the Congress when he returned to it.

He served as minister in the I.K. Gujral government and in the Manmohan Singh governments from 2004 to 2014. He was at various times minister for information and broadcasting, urban development, petroleum and natural gas, science and technology.

Jaipal Reddy was born on January 16, 1942, to a rich agriculture family, completed his primary education in a government school at Devarakonda and did his post graduation from Osmania University.

He started his political carrier as a student leader, joined the Congress and was elected MLA from Kalwakurthy for the first time in 1969. About three decades later, in 1998, he was the first MP from south India to receive the best parliamentarian award. He won the Kalwakurthy seat three more times.

Jaipal Reddy, who was known for his oratory skills and he was also remembered for capturing the public with his speeches.

He quit the Congress in protest against Prime Minister Indira Gandhi's imposition of the Emergency in 1977, and joined the Janata Party then led by Jayaprakash Narayan. He contested against Indira Gandhi from Medak Lok Sabha seat.

Several Congress leaders while expressing their grief on the death of Jaipal Reddy said “he was gifted with a powerful voice and a varied experience. He always attracted the attention of the people and the leaders with his inspiring speeches”.

Leaders across spectrum hail him as fine politician
Tributes poured in for Congress veteran S Jaipal Reddy, who passed away in the early hours of Sunday at the age of 77. Prime Minister Narendra Modi remembered him as an effective administrator.

In a tweet, Mr Modi said, “Shri Jaipal Reddy had years of experience in public life. He was respected as an articulate speaker and effective administrator. Saddened by his demise.” Former Prime Minister Dr Manmohan Singh called him a friend and expressed deep sadness at his untimely demise. “He was a treasure of wisdom and knowledge. My condolences to the bereaved family,” Dr Singh said in a statement. Reddy had served in Mr Singh’s Cabinet between 2004-14.

UPA Chairperson  Sonia Gandhi described Reddy as respected leader across political parties and adored by the media for his accessibility and forthright responses.

“He always had the interest of people close to his heart,” she said. She even sent a condolence letter to Mrs Reddy.

“An honest and upright politician, he will be known for his erudition and scholarship,” he said, adding that Mr. Reddy’s death is a big loss to the secular democratic forces in the country. Recalling his association with Mr. Reddy, Union Minister Mr. Ram Vilas Paswan said his death has caused an irreparable loss to the public life. Opposition leader Mr. Sharad Yadav said he was an able administrator and great parliamentarian whose speeches in Parliament will be remembered. Mr. Reddy always thought of the welfare of the downtrodden people and was honest to the core, Mr. Yadav said