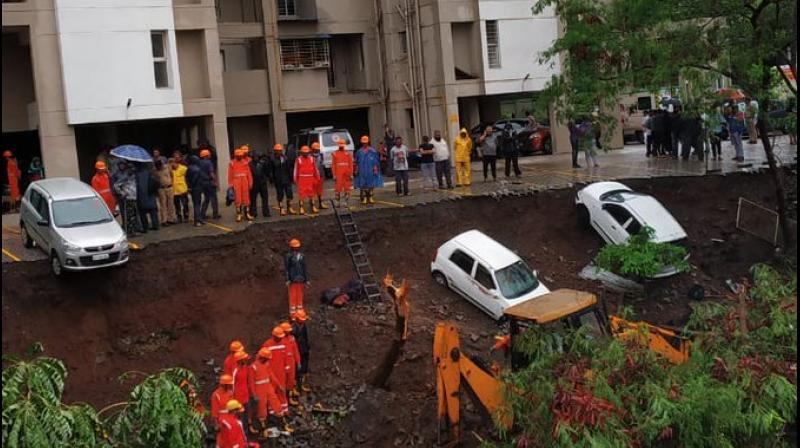 An NDRF team has been rushed to the spot (Photo: ANI | Twitter)

Pune: At least 15 people, including four children, were killed when a portion of the compound wall of a housing society collapsed on shanties adjacent to it in Kondhwa here in the early hours of Saturday.

The shanties were set up for labourers working in a nearby construction site. A fire brigade official said incessant rains might have led to the collapse of the wall. Pune received 73.1 millimetres of rain on Friday, the second highest rainfall in June since 2010.

The fire brigade, a team of National Disaster Response Force (NDRF) personnel and police rushed to the spot to carry out rescue operations.

A fire brigade official said that the victims were natives of either Bihar or Uttar Pradesh. All the injured have been shifted to hospital and District Collector Naval Kishore Ram visited the spot of the incident. "We have ordered an inquiry into the incident and those responsible will be punished," he said.

Maharashtra Chief Minister Devendra Fadnavis expressed his condolences to families of those who lost their lives due to the wall collapse in Pune on Saturday.

Meanwhile, Mukta Tilak, Mayor Pune, on Saturday said that a 'work stop' order has been issued so that "no work can be continued at the construction site."