Hazare said he has been assured by the govt that appointments of Lokpal at the Centre and Lokayuktas in the states would be made soon. 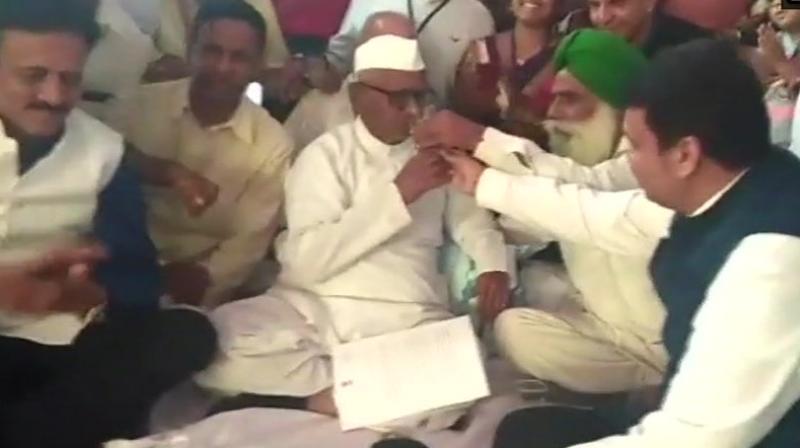 New Delhi: Social activist Anna Hazare, who has been on an indefinite hunger strike in Delhi for a week demanding setting up of the Lokpal, ended his fast on Thursday following talks with Maharashtra Chief Minister Devendra Fadnavis and Union Minister of State for Agriculture Gajendra Singh Shekhawat.

"They (government) have assured us that they will make the appointments as soon as possible. I will see till August and we will begin again in September. It should be done within a time frame. ((Though Maharashtra) Chief Minister (Devendra) Fadnavis has said that it will not even take six months, we will see," Hazare said while talking to the reporters.

The 80-year-old anti-corruption activist further said, “The government and the public are not separate entities. It is the duty of the government to do good for the people."

The venue of his protest was the same iconic Ram Lila Maidan, where he had sat on a hunger strike in 2011 demanding that the then government set up a Lokpal to investigate cases of corruption.

Hazare was pressing for setting up of the Lokpal at the Centre and Lokayuktas in the states, besides implementation of the Swaminathan Commission report, which has suggested ways to address the agrarian distress.

Meanwhile, a man hurled a shoe towards the stage where Hazare, Fadnavis and Union minister Gajendra Singh Shekhawat were present, but it was unclear as to whom it was aimed at. The attacker was whisked away by the police. Hazare lost over five kg weight during the fast, his aide Datta Awari had claimed earlier.