The BJP wanted police to scrap FIR filed against Major Aditya of 10 Garhwal and his associates to file a fresh one without names of Armymen. 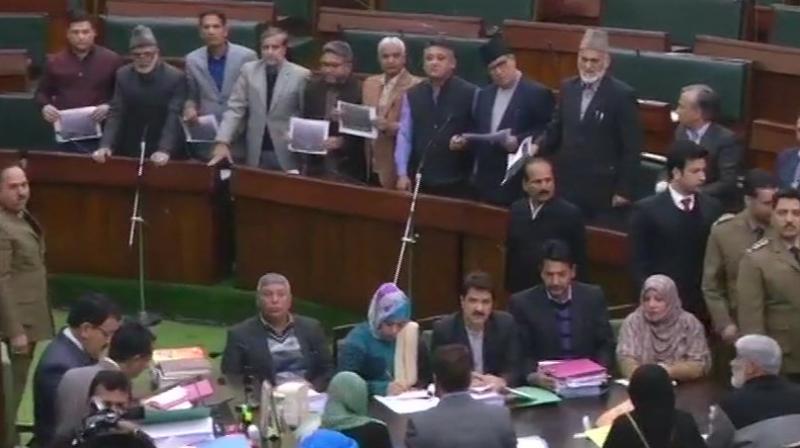 'The investigation into the unfortunate Shopian killings would be taken to its logical end. The Army would not be demoralized by registration of a single FIR. There can be a black sheep in the Army also,' Mufti said. (Photo: Twitter | ANI)

Srinagar: The Jammu and Kashmir Assembly on Monday witnessed noisy scenes over the recent killing of two youth in Army firing in southern Shopian district while the opposition National Conference (NC) demanded the arrest of the officer and soldiers involved in the incident.

On the other hand, the BJP wanted the police to withdraw the FIR registered at a Shopian police station against Major Aditya of 10 Garhwal and his associates and file a fresh one without mentioning the names of Army personnel.

“The government should withdraw the FIR against the Army personnel and lodge a fresh FIR without naming anybody,” said BJP’s RS Pathania while speaking in the Assembly which is currently in its budget session.

In this connection FIR No 26/ 2018 stands registered at Shopian police station. The PDP-BJP government has also ordered a magisterial inquiry into the incident and Kashmir’s Divisional Commissioner Baseer Ahmed Khan, has asked deputy commissioner of Shopian to ensure the inquiry is completed within three weeks’ time.

The BJP’s Pathania questioned the registration of a murder case against the Army asking “Why were serious charges levelled against the Army?” He added that criminal justice system “doesn’t work under pulls and pressures”.

But Chief Minister Mehbooba Mufti, snubbed her coalition partner, pledging that the investigations into the shooting incident would be taken to their logical conclusion.

“The investigation into the unfortunate Shopian killings would be taken to its logical end. The Army would not be demoralized by registration of a single FIR. There can be a black sheep in the Army also,” she said.

Later she reiterated her viewpoint in a tweet saying, “We will take the Shopian probe to its logical conclusion. Justice & peace are two sides of the same coin.”

Two youth Javed Ahmed Bhat, 20, and Suhail Javed Lone, 24 were killed and nine other civilians were injured when the Army fired at a stone-pelting mob in Shopian’s Ganowpora village on Saturday afternoon.

The incident evoked anger throughout the Valley where a shutdown was observed on Sunday to mourn and protest the killings.

The Army has said that its men had opened fire “in self-defence” and that too only after a 250-strong mob tried to lynch a Junior Commissioned Office (JCO) and snatch his service weapon.

It also said that seven soldiers were injured and eleven vehicles suffered damage in the mob attack.

The chief minister while speaking in the Assembly disclosed that police had advised the Army to avoid Ganowpora route.

According to police sources, the advisory was issued in view of tensions set off in the area following the killings of two Hizb-ul-Mujahideen militants in a fire fight with security forces in a neighbouring village on last Wednesday.

One of the slain men was a resident of Ganowpora.

The latter reacted by alleging that she “only knows playing politics on dead bodies”.

The House witnessed noisy protests by the opposition over the Shopian killings forcing Speaker Kavender Gupta, to adjourn the Question Hour to discuss the incident.

Earlier, members of the opposition from NC, Congress and CPI(M), supported by PDP legislators from Shopian, Muhammad Yousuf Bhat and Sonawar (Srinagar) Muhammad Ashraf Bhat, were on their feet soon after the House assembled for the day’s business to protest over the Shopian killings.

They moved an adjournment motion to discuss the prevailing law and order situation and raised slogans in support of their demand.

The Speaker asked them to take their seats, assuring them of a discussion after the Question Hour but the opposition did not budge from its demand prompting intervention from the chief minister.

CPI(M)’s Mohammad Yousuf Tarigami said he moved adjournment motion to discuss the Shopian killings and also continued cross border shelling and firing and the killings and damage caused to properties by it.