Restrictions were imposed as many as 168 times in past 2 years in 9 districts. 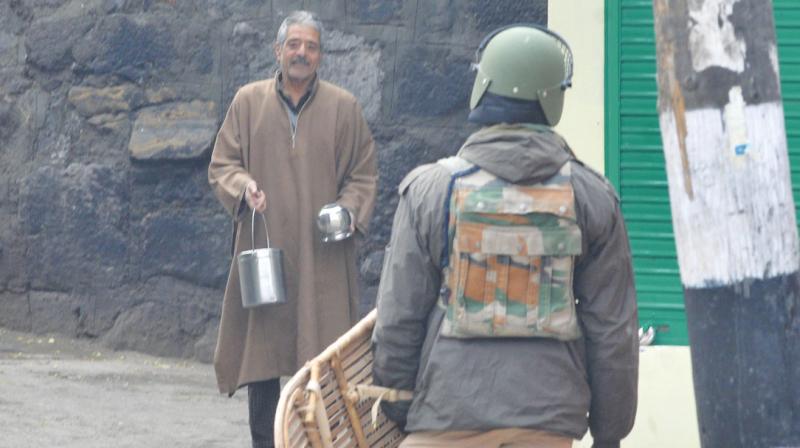 A resident pleads before a security force personnel to allow him to cross the road to fetch milk from the neighbourhood during curfew in central Srinagar. (Photo: H.U.Naqash)

Srinagar: Security clampdowns in Jammu and Kashmir have become commonplace now-a-days. Some Valley residents allege that the government and police resort to imposing restrictions on flimsy grounds to avoid face-offs with political opponents, separatists and youth, who look for an opportunity to indulge in stone-pelting.

Chief minister Mehbooba Mufti, while answering a query in the Assembly in the current Budget Session in Jammu, admitted to curfew and curfew-like restrictions having been imposed in nine out of 10 districts of the Valley as many as 168 times during the past two years.

These restrictions were imposed on southern Anantnag district for 51 times, followed by 37 in Baramulla district, 25 times each in Srinagar and Budgam districts, 17 in Pulwama district, 14 in Shopian district, nine in Bandipora district, seven in Kulgam district and three times in Ganderbal district. Also, Kishtwar district of Jammu region witnessed curfews and restrictions five times during the period.

Though the chief minister said restrictions were imposed “as necessities by the situation and while cordon-and-search operations were being carried out on specific information by the security forces”.

As per available statistics, curfew or curfew-like restrictions were imposed in central Srinagar, also known as Shahar-e-Khas, six dozen times in 2017, including 18 Fridays when the historic Grand Mosque was locked to prevent people from assembling inside for weekly congregational prayers.

This apart, along with restrictions, come the withdrawal of internet services. As per a report, in 2017, if internet was disconnected 77 times in the entire country, it was withdrawn 40 times in the Valley alone.

Around four lakh people of central Srinagar, often referred to as downtown Srinagar, bear the brunt of these curbs. “Such restrictions leave them anxious and depressed inside their homes whole day, sometimes two to three days. When it happens recurrently, it impacts them mentally,” said Valley’s well-know psychiatrist Dr Abdul Wahid Khan.

Frequent shutdown calls by separatist groups only add to the misery. The authorities said it is these shutdown calls, which have forced them to declare curfews and restrictions to prevent law and order situations emerging on ground on many occasions.

Though the residents have, over the years, learnt how to cope with such situations by filling their pantries and refrigerators with stocks of essentials, it is shortage of eatables, particularly milk, when curfews or restrictions are stretched for days and strictly enforced by the uniformed forces.

During the unrest triggered in the wake of Hizb-ul-Mujahedin commander Burhan Wani’s killing in July 2016, most parts of the Valley had witnessed curfew for months together without break.

Apart from affecting the quality of life of ordinary citizens, the curbs have caused economic suffering to local traders. Recently, the traders of central Srinagar formed a pressure group named, Shahar-e-Khas Traders’ and Manufacturers’ Coordination Committee, “to put up a joint front against the onslaught on our economy”.

Nazir Ahmad Shah, office-bearer of the committee, said, “Frequent imposition of curfews and restrictions has crippled the economy of downtown areas.”

The traders have been the worst sufferers. We have received an economic jolt due to prevailing situation, he said.

A statement issued by the committee added, “Forget business, there are days when our children don’t get milk due to strict restrictions. There are more than 200-year-old markets in downtown, which are being crushed economically.”

Separatist leader and J&K’s chief Muslim cleric Mirwaiz Umar Farooq said, “It has been turned into a police state in the garb of meeting a so-called security threat. In fact, they are trying to control everything by the gun.”