The meeting across a glass screen and through intercom, tightly controlled by Pak officials, has left the family 'horrified and depressed'. 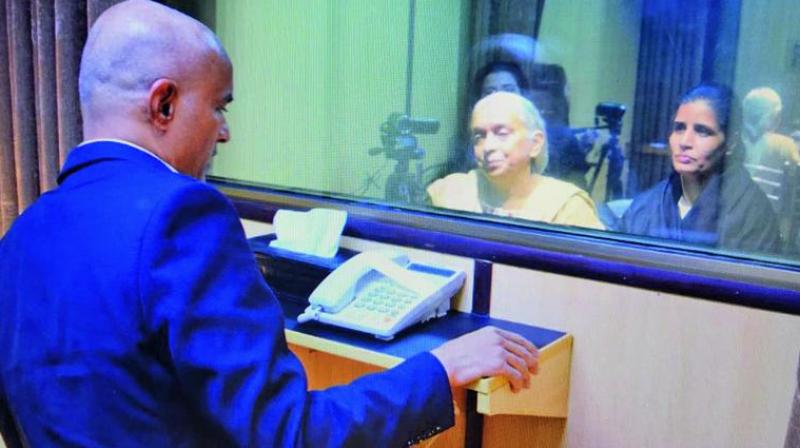 Jadhav's mother Avanti and wife Chetna met him face-to-face in Islamabad after 22 months of his captivity. (Photo: ANI | Twitter)

New Delhi: As Kulbhushan Jadhav met his wife and mother for the first time since his arrest and death sentence in Pakistan, the former navy official "parroted Pakistani propaganda" and kept saying he was a spy, according to Indian officials.

According to a report in Times of India, mother of Kulbhushan on Monday interrupted him saying "But why are you saying all this? You were doing business in Iran from where you were abducted. You must tell the truth."

Jadhav's mother Avanti and wife Chetna met him face-to-face in Islamabad after 22 months of his captivity.

Shocking details of the 40-minute meeting between Jadhav and his mother and wife in Islamabad emerged on Monday. The meeting across a glass screen and through intercom, tightly controlled by Pakistani officials, has left the family "horrified and depressed", according to relatives.

According to reports, Jadhav kept speaking in English and Hindi and repeating that he was a spy operating in Balochistan and was involved in terror activities - allegations by Pakistan that India has strongly refuted. His mother Avanti Jadhav and wife Chetankul kept trying to speak to him in Marathi but he wouldn't reciprocate.

It was as if Jadhav was programmed to stick to a script and repeat whatever Pakistan has charged him with, the family has reportedly told Indian officials.

The intervention also validated India's decision to insist that Jadhav's mother was to accompany wife Chetna. Pakistan had initially given visa only to Chetna but relented when India pressed that mother Avanti should also be allowed access.

Avanti and Chetna Jadhav were forced to change and take off their mangalsutras, bindis and bangles for the meeting. Chetankul Jadhav's shoes were not returned by Pakistan, which claims there was "something metallic" in them and they are being examined by forensic experts.

After the meeting, the family was forced to wait for their car outside the Pakistan Foreign Office. The wait left them in the open for harassment by the Pakistani media.

They were heckled over and again by questions like - "Aapke patidev ne hazaron begunah Pakistaniyo ke khoon se Holi kheli ispar kya kahengi? (your husband killed thousands of innocent Pakistanis, what do you have to say about that?)'" and "Aapke kya jazbaat hain apne kaatil bete se milne ke baad? (How do you feel after meeting your killer son?)"