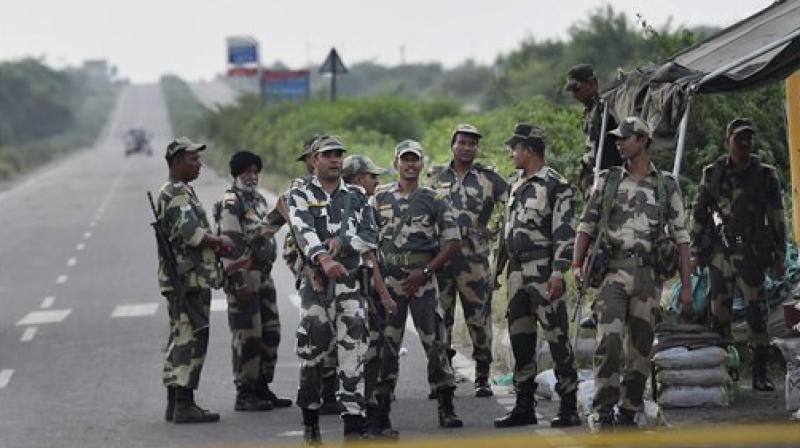 Sirsa: Security has been strengthened to avoid any untoward incident in Haryana and neighbouring, hours before the sentencing of self-styled godman Gurmeet Ram Rahim Singh.

Panchkula-based judge Jagdeep Singh was flown to Rohtak on Monday morning to read out the sentence to the convict in a makeshift prison created within the jail.

Though his followers have started leaving Sirsa, where the Dera headquarters lie, several were still present in and around the premises, PTI reported.

A three-tier security ring is in place around Rohtak's Sunaria district jail where Ram Rahim is awaiting his sentence.

Local police spokesman Surjeet Singh said that some people were still inside the compound, but that it was impossible to know how many.

He said about 4,000 government troops, including Army and paramilitary soldiers, were patrolling the tiny town and the area outside the ashram.

The deputy commissioner of Rohtak, Atul Kumar, said those creating trouble will have to face bullets. "We will not allow anyone to create any sort of trouble in Rohtak. Anyone breaking law or indulging in acts of violence or arson will himself be responsible for his fate. Anyone creating trouble will be given a warning first and if he still pays no heed, then he will have to face the bullet," Kumar said in Rohtak, where the Army has been kept on standby.

While complete curfew is in place in Sirsa, locals have also been asked to stay indoors as a preventive measure. The statewide suspension of mobile Internet services remains till 11.30 am on Tuesday.

"We have made appropriate arrangements to maintain law and order in the district," a senior police official said.

The district administration is also providing buses to facilitate the departure of Dera followers, PTI added.

ADGP (law and order) Mohd Akil, who today took stock of the situation in Rohtak, also warned potential troublemakers. "Anyone who creates trouble will be taught a lesson, like in Panchkula and Sirsa,” he said.

The Rohtak Deputy Commissioner, meanwhile, asked people to not enter the district without any specific reason.

Atul Kumar also said that prohibitory orders under Section 144 of the Code of Criminal Procedure (CrPC), prohibiting assembly of five or more persons, and carrying of firearms and other weapons, were already in place in the district.

The Central Bureau of Investigation (CBI) special court judge will be flown to Rohtak to pronounce the quantum of sentence against the rape convict on Monday.

The high level security comes in the wake of violence that was created by Dera followers which killed 38 people and left over 269 injured.