India   All India  28 May 2018  Terror and talks do not go together: Swaraj on peace with Pak
India, All India

Terror and talks do not go together: Swaraj on peace with Pak

Swaraj said that its not like India is not ready for the talks, but it is not possible to do so if the terror on the border continues. 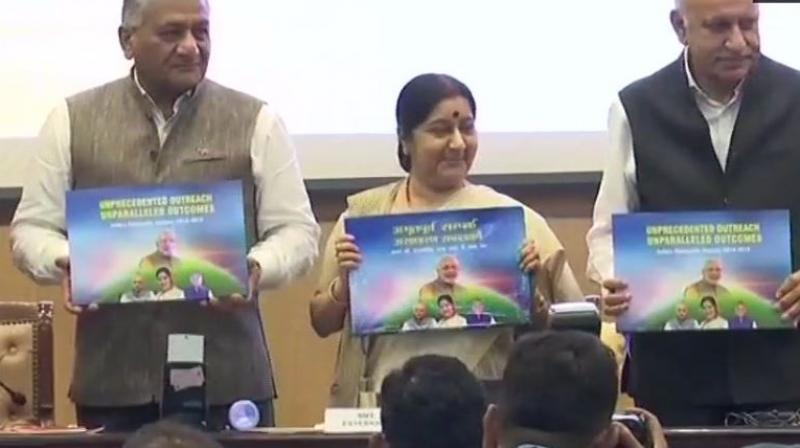 On the occassion, Swaraj also released a book on the achievements of the Ministry of External Affairs over the course of her tenure. (Photo: ANI | Twitter)

On the occassion, Swaraj also released a book on the achievements of the Ministry of External Affairs over the course of her tenure.

"90,000 people from Indian community have been rescued from various places. In his visits to many countries, PM has saved many people from severe punishments. Today, Indians living overseas are living peacefully," Swaraj said, also pointing out that it was shocking how the previous government did not visit any countries.

"When we formed our govt, we thought that we will cover all the 192 countries present at the UN, for ministerial level talks. And, we have covered 186 countries already," she added.

On relations with Pakistan and possibilities of peace, she said that its not like India is not ready for the talks, but it is not possible to do so if the terror on the border continues.

"Terror and talks cannot go together, be it post elections(Pakistan general elections scheduled for July 25) or even before. Jab seema par janaze uth rahe hon,to baatcheet ki awaaz acchi nahi lagti (When soldiers are dying at the border, voices calling for discussion do not seem fit)," she said.

Swaraj also responded to questions on Pakistan's Gilgit Baltistan Order 2018, which alters the status of the region.

"The answer we got in response of what happened with Gilgit Baltistan Order 2018. was laughable. They tried to teach us history. Pakistan always distorts history & doesn't believe in law. Only thing thing I felt while reading their answer was, 'look who's talking'," she said.

The External Affairs Minister also spoke on relations with China, especially after the infamous Doklam faceoff.

"I am repeating again, at the Doklam faceoff site there is no change in the situation, status quo is continuing," she said.

Swaraj also addressed some grievances that she received over Twitter.

"I got a tweet from someone who was visiting Mansarovar that they were not being allowed to take holy dip in the Mansarovar jheel. This wasn't the situation. There is always a designated place where you can take a bath, you cannot take dip just anywhere in the river," she said.

The senior BJP leader also slammed Congress for alleging detoriation in relations between India and Russia.

While responding to a question on Vijay Mallya's extradition from the, Swaraj said that PM Modi has informed British Prime Minister Theresa May that these UK courts questioning condition of jails in India is not correct as "these are the same prisons where they had jailed our leaders like Gandhi and Nehru."