Udaipur boy creates history, gets 100 per cent in JEE

Son of a compounder, Kalpit secures 360 out of 360 to clinch top rank. 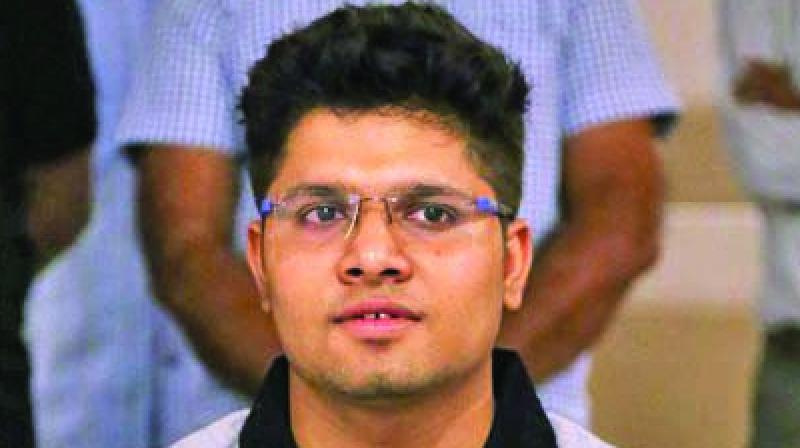 Jaipur: Udaipur boy Kalpit Veerwal has created history in JEE Mains by obtaining 100 per cent. Son of Pushkar Lal Veerwal, a nursing staff in a government hospital in Udaipur, and Pushpa Veerwal, a school teacher, Kalpit secured 360 out of 360 to clinch the first rank. The cut-off for the Common Rank List stands at 81.

A student of MDS Senior Secondary School, Kalpit has also been a student of Resonance Udaipur over the last 5 years.

Kalpit scored a 100 per cent at the IIT JEE Mains 2017, taking his performance in competitive examinations near to the zenith.

This achievement has now made history, as this is the first time that a candidate has scored 360/360 at JEE-Mains. CBSE chairperson R.K. Chaturvedi personally called Kalpit to deliver the news.

The 17-year-old boy wonder said that he had never thought about the rank although he had worked hard and prepared well for the exams. “Getting 100 per cent marks was beyond imagination. It has boosted my confidence. I will now concentrate on JEE advance,” Kalpit said.

According to him, Physics is his favourite subject, but he regularly studied all the three subjects and focused on clearing concepts. “I used to clear all my doubts in the class, but self-study, that too regularly, is very important if one wishes to get a top rank.”

“I used to study 5 to 6 hours daily at home apart from the time spent in the school and coaching class. I always completed my home work regularly,” said the boy, who never missed a class ever since he joined the coaching institute in Class 8.

His brother Hardik is doing MBBS from AIIMS. “Now, I am happy that my hard work has paid off to realise dream of my parents,” Kalpit said. As for future, he said that if gets good rank in JEE advance, he would like to join IIT Bombay for computer engineering.

And, how did you spend a break from rigorous routine?

“I played badminton or listened music,” he said.