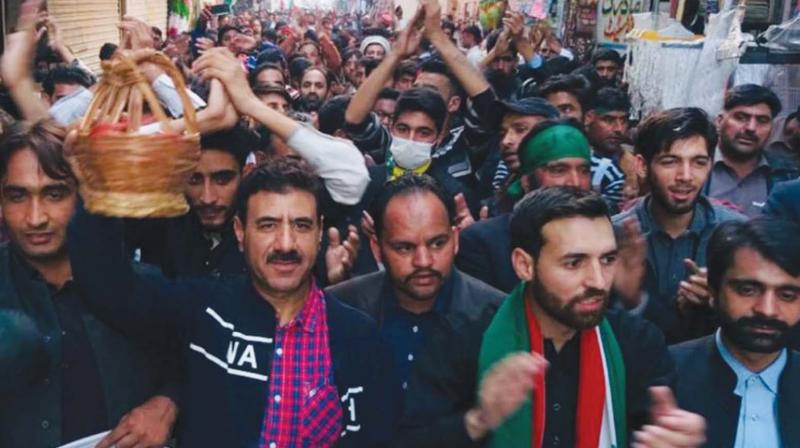 Pro-independence JKLF activists’ during a march in Kotli town of PoK on Nov. 26, 2018.

Srinagar: Political parties and activists that aim to attract people with pro-independence jingle in Pakistan-occupied-Kashmir (PoK) are caught in a difficult situation as the authorities have initiated prosecution by filing a chargesheet against them before a local court for spreading hatred against the state and the (Pakistan) Army. In Srinagar, separatists have shown solidarity with leaders in PoK demanding “independence”.

The case against 19 leaders and activists of pro-independence Jammu Kashmir Liberation Front (JKLF) and its students wing has been registered by the PoK police under provisions of the law pertaining to the offences against the state. A local court recently issued summons to Dr Toqeer Gilani, the president of JKLF for “Azad Kashmir and Gilgit, Baltistan”, and others after the police in its complaint accused them of “condemning the creation of the state and advocating abolition of its sovereignty”. The provision of the law empowers the court to award rigorous imprisonment for 10 years and the fine to a person if found guilty for commission of the offence.

In Srinagar, party leaders said that the “persecution” of its leadership and members in PoK “will leave a negative impact on our struggle” in Jammu and Kashmir.

“The reports about the harassment of our leaders and workers on the other side of the ceasefire line have caused disappointment among the people here in Jammu and Kashmir. The authorities in Muzaffarabad and Islamabad must realise it,” said a party leader.

A viral video had earlier shown the police raiding bookstalls in a PoKs Hajira area to confiscate books, periodicals and other reading material on independent Kashmir and its ideologues.

According to the prosecution in PoK, the pro-independence leaders made “provocative” speeches at a students convention organised by the Jammu Kashmir Students Liberation Front (JKSLF) at Kotli, the chief town of the Kotli district of PoK, on November 26, 2018. They not only criticised the government and the Army but also chanted provocative and seditious slogans at the meet, it said.

The police diary says that the speakers demanded that a joint administrative council be formed for PoK including Gilgit and Baltistan region of the held territory and that the Karachi agreement be abolished. Signed on April 28, 1949, between the Government of Pakistan and the then Government of PoK, the Karachi agreement governs the relations between Pakistan and PoK. It sets down the division of the powers between the two governments as well as the All Jammu and Kashmir Muslim Conference, the first political party of the “state” in Muzaffarabad. Through the agreement, PoK ceded to the Government of Pakistan complete control over Gilgit, Baltistan region of the “state” and also the control over subjects of defence, foreign affairs and communications in its own area.

“They made seditious speeches and also raised slogans against Pakistan, its armed forces and the government and its institutions and demanded eviction of Pakistan Army from Kashmir and while asking for an independent Kashmir incited people against the state of Pakistan,” the police has alleged.

A senior PoK official who spoke on the condition of anonymity told this newspaper that there is “nothing unusual or objectionable” in the polices registering a case against the JKLF leaders and activists. “No nation-state can tolerate open calls on the part of its citizens for the country to be dismembered or their seeking to spread hatred against its armed forces without any reason,” he asserted.

But Saleem Haroon, a senior leader of the JKLF, claimed that the charges levelled against his party colleagues will not withstand judicial scrutiny. “Jammu and Kashmir is an internationally recognised disputed territory. We have not committed any crime by asking for an independent and sovereign Kashmir. It is our partys known stand. Asking for freedom is not a crime,” he said. He added, “Nevertheless, if our asking for “aazadi” is a crime we will not hesitate from committing it time and again even if we are made to face gallows for it. We have been committing this on both sides of the ceasefire line.”

Another party leader Zafar Khan said, “We will challenge the (court) summons against out leadership in the court of Azad Kashmir. Were in constant contact with the leadership and will do whatever may be necessary and appropriate.”

The JKLF in a statement from London while condemning the action of PoK authorities said that it was a war against freedom of expression. The tight controls on freedom of expression have been a hallmark of government policy in Azad Kashmir in recent years and such acts go against articles 18, 19 and 20 of the universal declaration of Human Rights to which Pakistani government is a signatory,” it said.

Recently PoK witnessed a furore also over the profiling of sub-nationalist Kashmiris living in the territory by the police department. A senior officer of PoK polices special branch had on January 1 issued instructions through a formal letter to the concerned officials in all the 10 districts of the territory to collect the data of the sub-nationalists and their leaders and parties in their respective areas. The information sought on these citizens for their profiling apart from their personal particulars includes about their political and religious affiliations, past political activities and the sources of income.

The letter signed by superintendent of police (special branch) had also asked for the details on their political activities and the objectives of their outfit.