Agarwal also wondered why the media was talking about Jadhav when there are scores of other Indians in Pak jail. 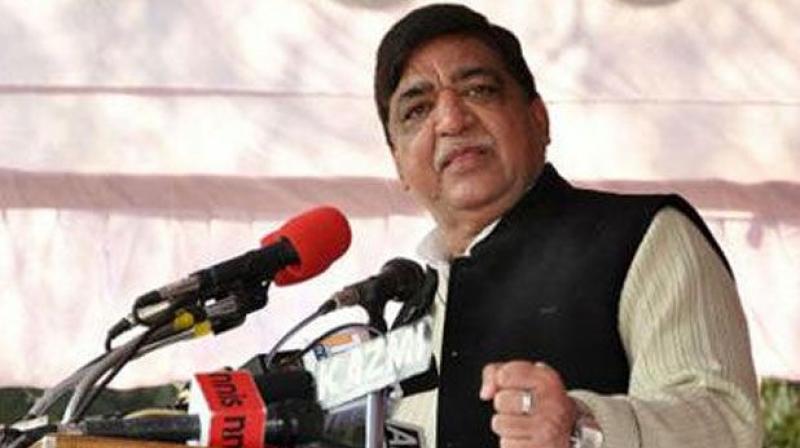 Naresh Agarwal said that India would, does and should treat anybody it considers a terrorist, as Jadhav has been treated by Pakistan. (Photo: PTI/File)

New Delhi: Samajwadi Party (SP) leader and Rajya Sabha MP Naresh Agarwal on Wednesday stepped into a controversy by condoning the humiliating way Islamabad treated the wife and mother of former navy official and Indian national Kulbhushan Jadhav when they went to meet him in Pakistan on Monday.

Naresh Agarwal said Pakistan considers Jadhav a terrorist, so it treated him accordingly. He added that India would, does and should do the same with those it considers terrorists.

Jadhav is on death row in Pakistan for alleged espionage. Agarwal wondered why the media was only talking about Jadhav "when there are scores of other Indians also in jail" in Pakistan.

The SP leader's comments came after the Ministry of External Affairs (MEA), on Tuesday, revealed details of the meeting between Jadhav and his wife and mother.

The ministry detailed the hours of humiliation faced by Jadhav's mother Avanti and wife Chetankul.

BJP spokesman GVL Narasimha Rao called Agarwal's comments a "betrayal of national interest" and again raked up its allegation that the SP's ally, the Congress, is always "siding with Pakistan".

Meanwhile, the Opposition created uproar in the Lok Sabha on Wednesday protesting over Pakistan's treatment to Jadhav's wife and mother in Islamabad.

"We condemn the way Jadhav's mother and wife were treated in Pakistan. Kulbhushan Jadhav should be brought back to the country," said Congress leader Mallikarjun Kharge.

Congress leader M Veerappa Moily said the manner in which Jadhav's family was treated was "inhuman".

"MEA should have ensured what kind of protocol is arranged for family. It's a diplomatic failure on the part of our MEA and country. EAM or PM should have taken up the matter with their counterparts in Pakistan." said Moily.

External Affairs Minister Sushma Swaraj will address the Lok Sabha on Thursday and will make a statement in the House on the issue.