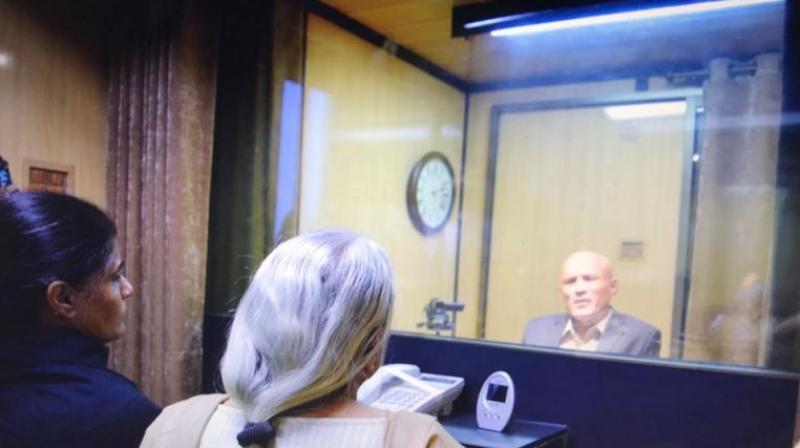 New Delhi: A day after Kulbhushan Jadhav met his mother Avanti and wife Chetankul in Islamabad, India criticised Pakistan for orchestrating an event which  “lacked credibility” as it was conducted in an “atmosphere of coercion”.

Mr Jadhav’s mother and wife were forced to change their clothes, remove their bangles, mangal sutra and bindi.  His mother was also not allowed to speak with Jadhav in their mother tongue, Marathi.

India, in an angry statement released by MEA on Tuesday, said that the exercise violated the letter and spirit of understanding, and raised questions over the health and well being of the Indian national, adding that Mr Jadhav appeared coerced and under considerable stress during the tightly-controlled and video-recorded interaction.

Countering Pakistan’s contention that the meeting was a “humanitarian gesture”, India said, “From the feedback we have received of the meeting, it appears that Mr Jadhav was under considerable stress and speaking in an atmosphere of coercion.”

Mr Jadhav’s mother and wife had a restricted interaction, whose pictures were released by Pakistan, with him for 40 minutes. Separated by a glass screen, they spoke through intercom at the heavily guarded building of the Pakistani foreign office in Islamabad. 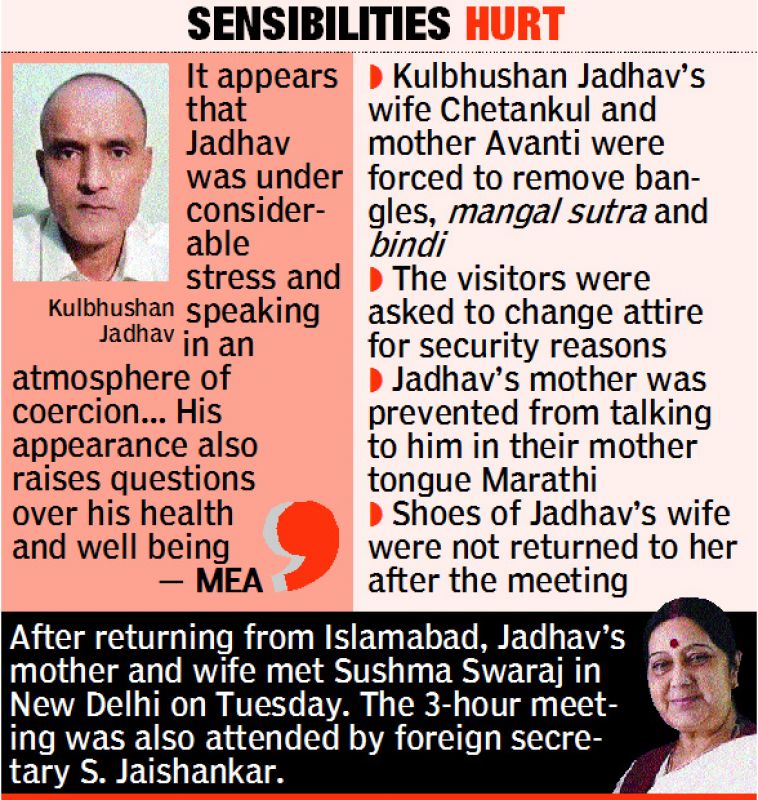 Indian deputy high commissioner to Pakistan J.P. Singh, who accompanied the two women, was not allowed to sit with them during the interaction.

Mr Jadhav’s mother and wife were taken to the meeting without informing Mr Singh, and the interaction began without him, India said.

Mr Singh could join only after pressing the matter with Pakistani officials, but was still kept behind an additional partition that did not allow him access to the meeting as agreed.

On Tuesday, Mr Jadhav’s mother and wife met external affairs minister Sushma Swaraj and top MEA officials, including foreign secretary S. Jaishankar and the Indian deputy high commissioner to Pakistan who returned with them from Islamabad.

Attacking the treatment of Mr Jadhav, India said that most of Mr Jadhav’s remarks were clearly tutored and designed “to perpetuate the false narrative” of his alleged spying in Pakistan, adding that Mr Jadhav’s “appearance also raises questions of his health and well being”. Family members, however, handled the situation with “great courage and fortitude,” India said.

“We also regret that contrary to assurances, the overall atmosphere of the meeting was intimidating insofar as family members were concerned,” it said.

Despite a clear agreement that the media would not be allowed close access, Pakistani press was allowed on multiple occasions to “approach family members closely, harass and hector them and hurl false and motivated accusations” about Mr Jadhav, India said.

Accusing Pakistan of disregarding cultural and religious sensibilities of family members under the pretext of security. “This included removal of mangal sutra, bangles and bindi, as well as a change in attire that was not warranted by security,” it said. “For some inexplicable reason, despite her repeated requests, Mr Jadhav’s wife’s shoes were not returned to her after the meeting,” it added.

Mr Jadhav’s mother was prevented from talking to her son in their mother tongue, Marathi. She was repeatedly interrupted when she tried to speak in Marathi and eventually prevented from proceeding further, India said.

Mr Jadhav, who was captured in March last year, was sentenced to death by a Pakistani military court for alleged spying, an accusation that India has dismissed as false. India claims that Mr Jadhav was kidnapped in Iran where he has legitimate business interests, and brought to Pakistan. To save Mr Jadhav, India moved the International Court of Justice, which ordered Pakistan in May to stay his execution.

Before the meeting, the two governments were in touch through diplomatic channels and had reached “clear understanding” on the meeting’s modalities and format, the MEA statement said.

While India “scrupulously abided by all its commitments”, Pakistan violated the letter and spirit of the understanding, it said.