India   All India  27 Nov 2019  'No threat of recession in India': Fin Min Sitharaman in Rajya Sabha
India, All India

'No threat of recession in India': Fin Min Sitharaman in Rajya Sabha

Sitharman was replying to a discussion on the economic situation in the country in Rajya Sabha. 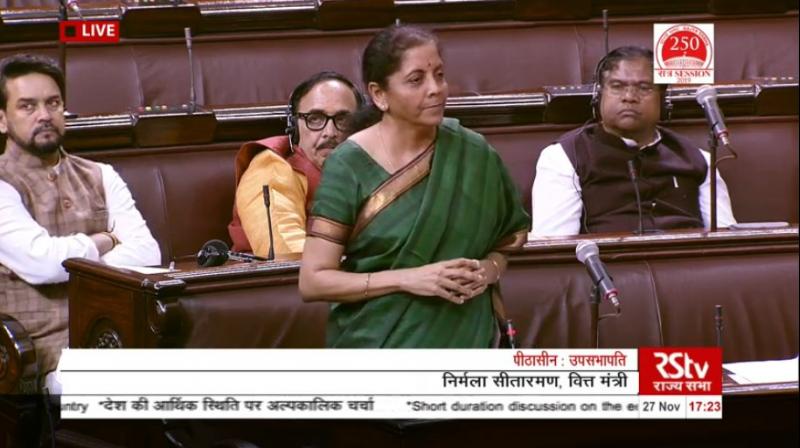 'Economic growth may have slowed but there is no recession, there can be no recession,' Sitharman said. (Photo: ANI)

New Delhi: Finance Minister Nirmala Sitharman on Wednesday said the Indian economy may have slowed down but there is no threat of a recession.

Replying to a discussion on the economic situation in the country in Rajya Sabha, she reeled out numbers comparison between five years under Congress-led UPA-II regime from 2009 to 2014 and BJP's first term from 2014 to 2019 to say inflation was lower and growth higher under the Modi government.

FDI inflows in 2009-14 were USD 189.5 billion and the same were USD 283.9 billion under BJP rule in the following five years, she said, adding foreign exchange reserves rose to USD 412.6 billion under BJP from USD 304.2 billion in UPA-II. "Economic growth may have slowed but there is no recession, there can be no recession," she said.