The 21-yr-old college going fisherwoman from Kerala became the victim of cyber bullying after her story was widely shared on social media. 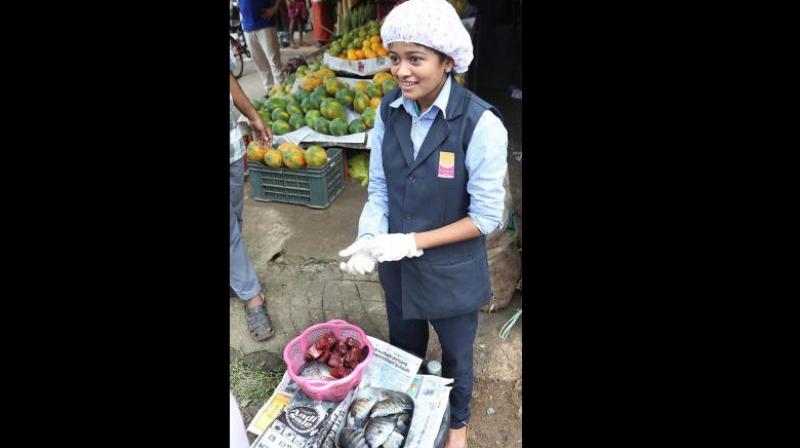 Sharing a picture of Hanan selling fish in her college uniform on his Facebook page, Vijayan said he was proud of the student and the government was with her. (Photo: Facebook)

Thiruvananthapuram: A day after she was bullied by some people on social media, the Kerala government on Friday came out in support of a college student who sold fish to raise money for her studies and to take care of her family.

Chief Minister Pinarayi Vijayan directed police to initiate action against those who launched the abusive propaganda on social media platforms against 21-year old Hanan whose story went viral after a Malayalam daily reported about her struggles.

He also asked the Ernakulam district collector to provide adequate protection to Hanan, who sold fish in a local market at Thammanam in the city after college hours.

A final year B.Sc (Chemistry) student at a private college in Thodupuzha, Hanan's touching story was widely shared on social media by several people, including film artists and politicians.

But, a section of social media users expressed doubts about her story and termed it as "fake", after which she was viciously trolled.

Coming down heavily on the cyber-bullying, the chief minister said everyone should keep in mind that many propaganda on social media platforms were "double-edged swords".

"People should be more cautious while using social media. It is improper to circulate anything which they get through cyber platforms. This will only help push the society towards further danger," he said in a Facebook post.

Sharing a picture of Hanan selling fish in her college uniform on his Facebook page, Vijayan said he was proud of the student and the government was with her. He also wanted the entire state to support the woman.

"Hanan has not only tried to find resources for her studies but also to support her family by doing various jobs. Feeling proud of her after coming to know about her life's experiences. Extending whole-hearted support to Hanan to go forward", Vijayan added.

Marxist veteran V S Achuthanandan also supported the woman, hailing from Thrissur, and demanded action against those behind the cyber attack.

Kerala Women's Commission chairperson M C Josephine termed the social media abuse as "cyber goondaism" and said police had been directed to register a case in this regard.

Union minister Alphons Kannanthanam had also come out in support of the student on Thursday and wrote on social media, "Kerala sharks stop attacking #Hanan. I'm ashamed. Here is a girl trying to put together a shattered life. You vultures!"

Meanwhile, Hanan said she was thankful for the government's support. She said she would like to continue with the fish business to look after her family and studies.

With the abusive comments pouring in on social media, a teary-eyed Hanan had yesterday appealed to her critics with folded hands to leave her alone.

"I do not want any help. Kindly leave me alone and allow me to do any kind of menial jobs to earn my daily bread," she said.

However, Hanan's college principal and neighbours had come out in her support and said she was not lying about her background.

Principal of Al Azhar college at Thodupuzha, S G Pillai, said though financial support was pouring in for her from various quarters, she had rejected it.

He also deplored the "unjustified" and "insane" attack on Hanan on the social media.

Film director, Arun Gopi, who had offered to give Hanan a role in his upcoming film, said it was unfortunate that she was being attacked by people who claimed that she was selling fish as part of a promotion of his film.

"I had commended her work. She is an inspiration to today's youngsters," he said. Hearing Hanan's story, Gopi had offered her a role in his forthcoming movie starring Malayalam superstar Mohanlal's son Pranav.