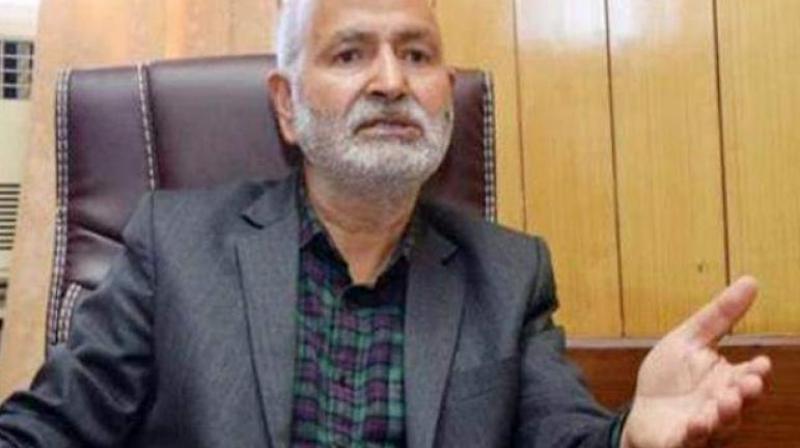 SRINAGAR: People’s Democratic Party (PDP) leader and former minister Naeem Akhtar said on Friday that he was asked to choose between luxury and agony after being detained by the authorities in August last year.

“I was asked to quit politics to walk free, evade harrying and live a comfortable life with my family,” Akhtar told this newspaper a day after he was evicted from a government bungalow on Srinagar’s high-security Gupkar Road. The house was allotted to him few years ago as he was a “protected person” in view of the threat perception.

Last week, Jammu and Kashmir authorities revoked Akhtar’s detention under the stringent Public Safety Act (PSA), but on reaching his home he was placed under house arrest. At 11 am on Thursday, he said, he was visited by two officials of the estates department who asked him to vacate his government accommodation in five hours or face forcible eviction.

“I sought a day’s time but they said that we (Akhtar, his spouse and daughter) would be forcibly evicted if we don’t vacate the premises by 4 pm. They said this even after knowing that I’m under house arrest and do not have any place of my own to shift to,” he said.

Akhtar had sold his own house in city’s Barzulla locality some time ago after it was damaged in a series of attacks allegedly carried out by militants and anti-government protesters. “It was damaged, making it unusable. Also, being located in a congested area and I being a vulnerable person, I decided to dispose it off,” he said.

Akhtar, who after seeking premature retirement from government service in 2008, when he was holding the lucrative post of tourism commissioner/secretary, to join the PDP, said that he was repeatedly visited by government representatives and intelligence officials during his detention at “subsidiary jails”. He added that they persuaded him to quit politics or, at least, sign a bond saying that he would not indulge in any political activity after being released.

“I was asked to sign the bond many times. I was, in fact, the first person among the detainees who was approached for it in September last year itself. They told me that since I’m facing several health issues it would be better for me to come out of the jail and go home,” he said.

The 69-year-old politician added, “They also told me that ‘you are an elderly person’, to which I said that there are many people who are older than me and yet incarcerated and that they should take a view of everybody if they are really concerned about our age and health issues”.

He said that the bond the authorities wanted him to sign was “horribly worded”. “I don’t think that people even in an autocracy would be asked to sign such a bond,” Akhtar said and added that after he was shifted from a city hotel to Srinagar’s MLAs hostel, also declared a subsidiary jail. He was again visited by some officials who told him that considering his age and failing health, the government was willing to set him free on the condition that he agreed to retire from politics.

“I told them that more than 100,000 people have already lost their lives in the three-decade-old turmoil, many of them just 14-15 years old. If an old man dies in your prison it won’t be a big deal and I won’t consider it as a sacrifice.”

He said that it was after this meeting  that he was detained under the PSA. “After some time, I was again approached by some people who were not locals. I told them that the solution of Kashmir issue can’t be evaded even if the government of India reduces J&K to a municipality. I was unexpectedly released from the makeshift jail after my detention under the PSA was revoked last week. However, after being taken to my home I was placed under house arrest and barred from meeting anybody, including media representatives,” he said.

Akhtar said that after he was asked to vacate the government accommodation on Thursday, the policemen deployed at the premises told him that they won’t permit him to leave. “They questioned how could I leave while being under house arrest. The issue between the police and the estates department could be sorted out only late Thursday evening. I was shifted at 9 pm. I’m at my sister’s place right now and we will be shifting to a rented accommodation soon. But I have been instructed not to venture out without permission,” he said.