Naidu said the Modi-Trump meet speaks of the rising importance of India in the global economic and geo-political order. 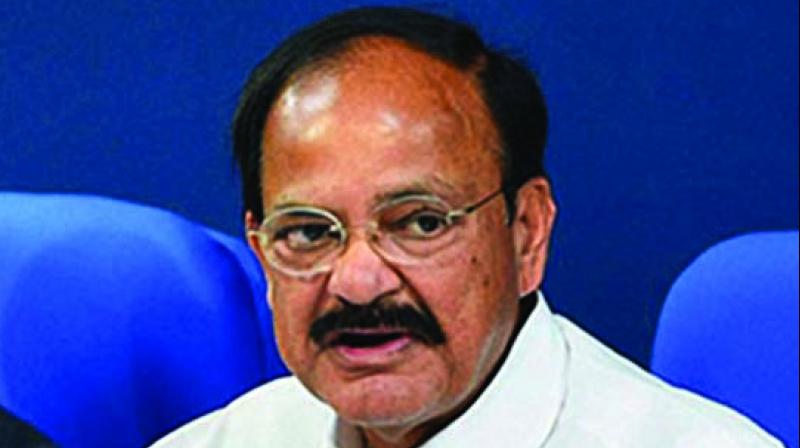 New Delhi: After the Congress Party dubbed the India-United States joint statement as "disappointing" and believed that nothing will come out of Prime Minister Narendra Modi's US visit, Information and Broadcasting Minister M Venkaiah Naidu on Tuesday said it is "sheer jealousy and guilt" of the grand old party that it is deliberately refusing to see and believe the significant outcomes of this visit.

Addressing the media, Naidu said Prime Minister's every foreign visit holds mirror to the lost opportunities during the ten years of UPA rule.

"I am not surprised to know of the disappointment expressed by Congress over Prime Minister's visit to the US and his meeting with President Donald Trump last night. Congress deliberately refuses to see and believe the significant outcomes of this visit of PM and his meeting with the new US President for the first time. This is borne out of "sheer jealousy and guilt" as Prime Minister's every foreign visit holds mirror to the lost opportunities during the ten years of UPA rule," Naidu said.

He said the grand and warm welcome extended to Prime Minister Modi by the White House and the new President speaks of the rising importance of India in the global economic and geo-political order.

"Congress is particularly disappointed by the fact the US President Donald Trump acknowledged the accomplishments of India under Prime Minister Modi during the last three years. He particularly referred to the comprehensive battle against corruption launched during this period," he added.

Information and Broadcasting Minister further stated that the main objective of Prime Minister's visit to the US is to further strengthen and consolidate the Indo-US relations besides sharing perspectives on a wide range of regional and global issues including the menace of terrorism, trade and economic cooperation, strategic partnership and others.

"In this regard, the visit of Prime Minister is singular success which was reflected in the joint media briefing made by the two leaders," he said.

Taking a dig at the Congress Party, Naidu said that the growing status of Prime Minister Modi as a global leader and statesman and the rising status of India in the comity of nations obviously is not digested by the Congress given their lackluster foreign policy over the earlier ten years.

"Under PM Modi, India is speaking to its strengths in various international forums and is pursuing a dynamic, energetic and purposeful foreign policy with the sole objective of furthering national goal of rapid economic development. The US administration has declared Syed Salahuddin of Hizbul Mujahideen as a 'global terrorist' reflecting India's concerns in the matter. If this is not a major outcome of PM's visit to the US for the Congress Party, this is a clear evidence of disorientation that this party is suffering from with its growing irrelevance and mounting frustration," he added.

Naidu said the people of the country are happy over the bond struck by Prime Minister Modi with the new US leadership Monday night.

"This is nothing but a testimony to the success of Prime Minister's visit to the US and his meeting with President Trump. It is time the Congress party reconciles to the new narrative and the New India emerging under PM Modi's leadership," he added.