The Palestinian President Mahmood Abbas has termed it “nonsense” while Jordan has rejected this proposal. 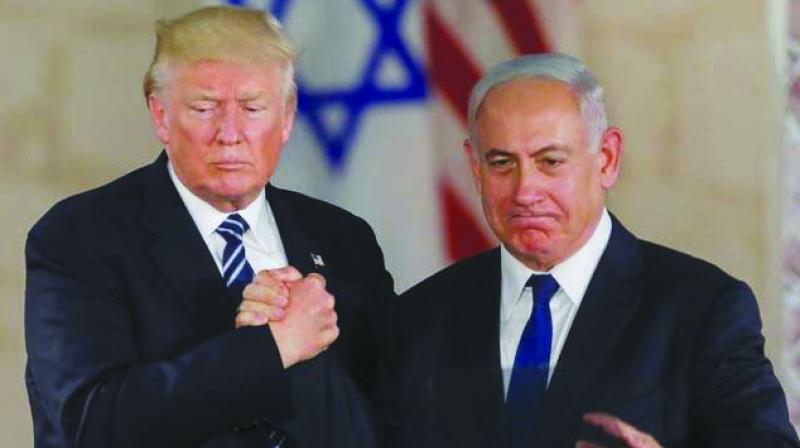 US President Donald Trump’s Middle East Plan recognising Israeli sovereignty over settlements in the occupied West Bank and proposing Jerusalem as an undivided capital of Israel has once again heated the West Asia. The so-called peace plan has envisaged a limited Palestinian state and has also deprived Palestinians of their rights they had been fighting for decades. This plan completely sides with Israel and giving Palestinians control over 15 to 20 per cent of what it called “Historic Palestine”.

Reacting to the plan, thousands of Palestinians in Gaza Strip and occupied West Bank are protesting against this. The Palestinian President Mahmood Abbas has termed it “nonsense” while Jordan has rejected this proposal. The recent announcement has once again attracted criticism from around the world. By doing so, Mr Trump has once again intervened in Israel’s election campaigns putting an effort to ensure Mr Netanyahu’s win.

Mr Trump’s administration had been drafting this plan for more than two-and-a-half years but it has been released on a very urgent basis to again help the Israeli prime ministerial candidate Benjamin Netanyahu to retain his decade-old regime. As he could not prove his majority in the two recent elections, the US President has now taken both the future Prime Ministers Netanyahu and Benny Gantz into confidence on the peace plan deal.

Mr Trump had shared the details of the proposed peace plan with both of them but did not find it necessary to involve the Palestinian leadership to the Washington talks on the same. The Palestinian leadership had already rejected the plan before its release, as they no longer trusted the aggressive and prejudiced policies of the US on the Palestine-Israel crisis. Reacting to this plan, the Palestinian Authority had even threatened to withdraw from the Oslo accord with Israel if the US announces its peace plan for Middle East. Palestinians are very clear on what the US can do for them. Undoubtedly, all the decisions of the Trump administration since he took over the White House have been favoring Israel and ignoring Palestinian causes. The US administration has recognised Jerusalem as Israel’s new capital and relocated it embassy there from Tel Aviv.

On March 25, 2019, just before Israel went to the first of its recent polls, the US had recognised the Golan Heights as part of Israel through a presidential proclamation signed by the President. It became the only nation which recognizes Israeli rather than Syrian sovereignty over the Golan Heights region. Favouring Israel, the US has discontinued the funds for United Nations’ Palestinian refugee Agency and damaged the economy of more than hundreds of millions of dollars in aid to the Palestinians. This aside, cutting of the West Bank aid, shutting down the PLO mission in Washington and many such steps have generated dissatisfaction among Palestinians. The Trump administration made a potential election gift to Netanyahu on April 8, hours before the polls opened in Israel, when the President officially declared Iran’s Revolutionary Guards Corps a terror outfit. All these steps taken just before the elections are enough to convey the desired message to Israeli voters that their current Prime Minister and his best relationship with the US President were beneficial for their country.

Israel at the same time kept passing laws that directly targeted the religious minority in the country. It passed the Nation State Bill in July 2018 which states that “the right to exercise national self determination” in Israel is “unique” to the Jewish people. It also establishes Hebrew as Israel’s official language and downgrades Arabic, which is widely spoken by the Arab Israeli population, to a second language. This had attracted controversies and criticism from around the world. The settlement bill that became a law now legalises Israeli settlement homes on private Palestine land in West Bank. Around 120 formal settlements have been established on disputed territories up till now.

Both Israel and United States are to face elections this year. Mr Trump is going to face his anti-incumbency test this November but the people of Israel have already rejected Mr Netanyahu in the last two elections and now the country will go to polls for the third time in less than one year. None of the major political parties could fetch a majority. Mr Netanyahu’s party lost to Benny Gantz’s Blue and White in both the elections — held in April and September — last year. An attempt to form a unity government was also made by Mr Netanyahu but it did not work well. The recent results of both the elections have exposed anti-incumbency against Mr Netanyahu and a rejection of his staunch Judaism and ultranationalism. The right-wingers were severely accused of bribery, distrust and corruption during the campaigns. To divert the voter’s mind from all such allegations, Mr Netanyahu shifted the people’s focus to national security and also created an environment of threat for Israelis. Speaking hard on the one-nation theory too did not work for him.

So with new strategies the US will definitely take a step ultimately focused on harvesting political gains. It might be a very crucial elections year as the Trump-Netanyahu duo may go to any limits to help each other retain power. Mr Netanyahu can prove helpful for Mr Trump in terms of wooing the Jewish population of the US. Though Mr Trump is unpopular among the American Jews, favours to Israel on all socio-political and religious issues might turn some of them. The Jewish population in the US is 6.7 millions.

Getting military, financial and political support from it, Israel has remained the favourite of the US. The US used its UNSC veto 42 times out of 83 with respect to resolutions related to Israel. Statistics say that between 1991 and 2011, the US used its veto 24 times of which 15 were to protect Israel alone. Mr Trump fetched 24 per cent of the Jewish vote in the last elections. He has fulfilled his campaign pledge by upending the status quo in the Middle East. David Friedman who supports the construction of West Bank settlements has been working aggressively as the US Ambassador to Israel. Many of the President’s key advisors including his son-in-law Jared Kushner are Jewish. They have been framing policies favouring Israeli interests. In the peace plan, Trumps son-in-law has also included infrastructure, business, tourism projects and construction of a travel corridor in Israel that would be linking the West Bank and the Gaza Strip with a highway. They have a big economic stake there.

The Palestine-Israel crisis is a critical and sensitive one, and former US Presidents like Bill Clinton, George W. Bush and Barack Obama have maintained a neutral stand on it. Jerusalem’s Al-Aqsa mosque, which is most sacred among Arab masses, should not have been disturbed. Palestinians view East Jerusalem as occupied territory and have been claiming it for their state capital. But barring Palestinians entry into their mosque, firing tear gas and stun grenades at worshippers and raids on the mosque by Israeli forces have now become routine activities. A very tense environment persists in the region for years. The Security Council’s Resolution 2334 which concerns Israeli settlements in “Palestinian territories occupied since 1967” says that the Israeli settlement are in violation of international law. Mr Trump should have maintained the dignity of the White House while proposing the new plan. He should have addressed the two-nation theory rationally and in keeping with traditional American policies. Now it’s all up to the discretion of world organisations with regard to delivering justice to Palestinians.

The writer is the Janata Dal (United) chief general secretary and national spokesperson. The views expressed here are personal.