According to MEA statement, Pakistan 'conducted the meeting in a manner which violated the letter and spirit of our understandings'. 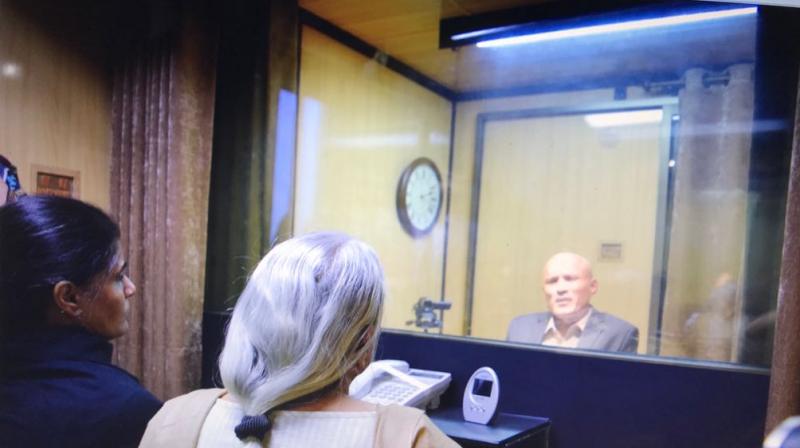 New Delhi: A day after meeting Kulbhushan Jadhav in Islamabad, the former Indian Navy official’s wife and mother told the Ministry of External Affairs (MEA) on Tuesday he spoke to them in “an atmosphere of coercion” and his responses were also tutored.

Jadhav’s mother Avanti and wife Chetankul on Tuesday met Union minister Sushma Swaraj at her residence for a debrief before meeting the officials at the MEA.

The MEA released a statement after meeting Jadhav’s family, revealing the details of Avanti and Chetankul’s visit to Islamabad.

Pakistan "conducted the meeting in a manner that violated the letter and spirit of our understandings," the MEA said. This happened despite continuous interaction between the governments of the two countries on the details of the Indian prisoner’s meeting with his wife and mother in Islamabad.

"Under the pretext of security precautions, the cultural and religious sensibilities of family members were disregarded. This included removal of mangal sutra, bangles and bindi, as well as a change in attire that was not warranted by security," the statement said.

Kulbhushan Jadhav's mother was not allowed to speak to her son in their mother tongue, despite this being the most natural mode of communication. She was interrupted while doing so and "eventually prevented in this regard."

For some inexplicably peculiar security reason, the shoes of Jadhav's wife were not returned to her even when the meeting was over, despite making several requests for it.

According to the feedback of the meeting received from Jadhav's mother and wife, he was "under considerable stress and speaking in an atmosphere of coercion". Most of his responses were also tutored, in accordance to the false narrative of his activities in Pakistan. His appearance also was gaunt and frail, suggesting he was not keeping well.

However, Pakistan had earlier claimed that Jadhav was in "an excellent healthy condition" in a medical report prepared by a German doctor from a Dubai-based hospital. It also claimed that Jadhav's Body Mass Index (BMI) was ideal for his height.

The date on the report was handwritten and it was not clear where his medical examination was performed.

In addition, India's Deputy High Commissioner JP Singh was “kept behind an additional partition that did not allow him access to the meeting as agreed”, the MEA said. This was despite the initial agreement between India and Pakistan to allow Singh to be present with Jadhav’s family members during the meeting.

The MEA added that the Pakistani media was allowed to approach Jadhav's mother and wife and on multiple occasions harassed them, hurling accusations and insults about Jadhav, despite a clear agreement that media will not be allowed.

The MEA added that it regretted the fact that the meeting was intimidating to Jadhav's family and lauded the "courage and fortitude" with which they handled the situation despite frictions.

In conclusion, the statement read that, "the manner in which the meeting was conducted and its aftermath was clearly an attempt to bolster a false and unsubstantiated narrative of Jadhav’s alleged activities," and termed it an exercise that completely lacked credibility.