Modi hit out at Congress for indulging in 'caste politics' in reference to oppn party’s leaders comment on PM's caste and his family. 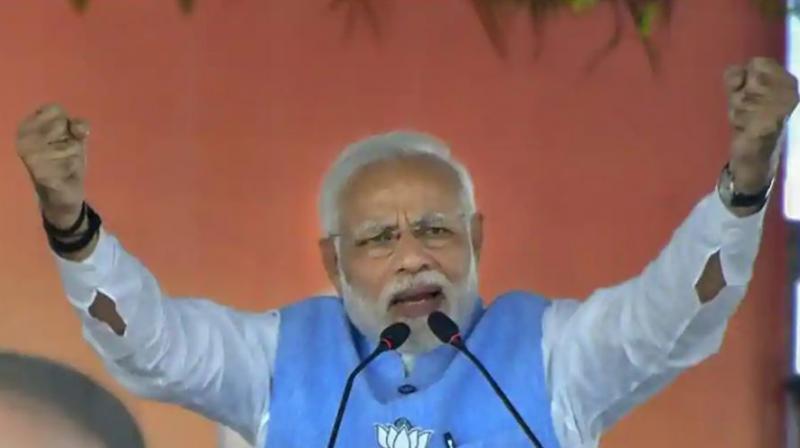 PM Modi said that Congress has forgotten all courtesies and it is all being done under Rahul Gandhi. (Photo: PTI)

Alwar: Prime Minister Narendra Modi has directed an attack on Pakistan, without naming the country, which many saw was an attempt to point Imran Khan’s effort at seeking financial aid from various allies.

PM Modi also hit out at Congress for indulging in “caste politics and touching new low in politics” in reference to main opposition party’s leaders comment on PM Modi’s caste and his family.

“Those who till yesterday threatened to drop bombs on India are begging today due to our strategy. Modi’s caste was not behind it. It was because of the 125 crore Indians,” the Prime Minister said at a rally in Rajasthan’s Alwar on Sunday.

Saudi Arabia agreed to give Pakistan USD 6 billion during Khan’s visit. This decision came after the US suspended USD 1.66 billion in security assistance to Pakistan.

PM Modi said that Congress has forgotten all courtesies and it is all being done under Rahul Gandhi. He also said the Congress has "no courage" to talk about development and therefore, "they ask about the caste of Modi".

Will you vote on the basis of Modi's caste? Will the future of Rajasthan be decided on basis of where Modi was born,” PM Modi asked.

"It doesn't matter who spoke that (Joshi's remarks) because everyone knows about the 'naamdaar' who makes them say such things," he said.

Congress leader Raj Babbar had compared the rupee’s slide with the age of the Prime Minister’s mother and Vilas Muttemwar said: “nobody knows the name of your (PM Modi’s) father”.

“Congressmen are abusing my mother. They are asking my caste. I am not surprised at all. Whoever is speaking is speaking at the behest of ‘naamdar’,” Modi said.

PM Modi also said that he wants to tell the “naamdars” that when the head of a country visits any foreign country, the world doesn’t recognise him with his caste but identifies him with 125 crore Indians.

With the ongoing Ayodhya issue, PM Modi accused Congress party of adopting “delaying tactics” in the Supreme Court to create hurdles in the construction of Ram temple and playing a “dangerous game” of threatening the judges with impeachment.

PM Modi questioned that is it fair to drag the country’s judiciary into politics this way? He further added that is it right to put pressure on the Supreme Court and judiciary?

The Prime Minister said he wants to assure the judges and the judiciary that till the time Bharatiya Janata Party (BJP) is in power, it will not allow the Congress’ “black deeds” within the temple of democracy.

“We will stop it with full force. I want to tell the judges not be afraid of impeachment threats. You courageously go on the path of justice. The country will walk with you. I want to assure you,” he said.