The forces gunned down two militants in Nowpora village of Tujjar area outside the north-western town of Sopore on Tuesday. 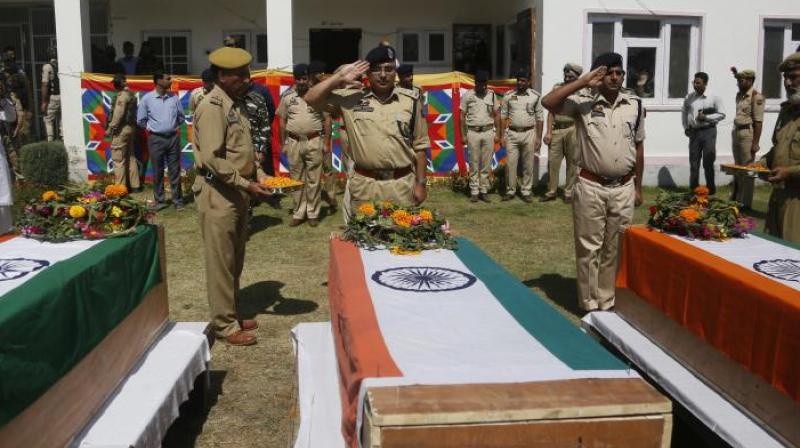 The identity of the slain men is being ascertained, a police spokesman said here. (Photo: File | PTI)

Srinagar:The Jammu and Kashmir government on Tuesday admitted to special police officers (SPOs) submitting their resignations in the face of militant threat, but said that the number was “negligible” and the phenomenon was restricted to certain parts of south Kashmir only.

Meanwhile, the security forces gunned down two militants in a fire-fight in Nowpora village of Tujjar area outside the north-western town of Sopore on Tuesday. The identity of the slain men is being ascertained, a police spokesman said here. With this the number of the militants slain by the security forces in separate operations across the Valley in past three days has risen to eight. One Army jawan also laid down his life while fighting militants.

Last week, the killing of three SPOs following their abduction by militants in southern Shopian district triggered resignations by a number of policemen and SPOs in the Valley and some of them posted videos on social media confirming it.

But the ministry of home affairs (MHA) was quick to deny that any policeman had resigned and termed such reports are “untrue and motivated” and part of a false propaganda by certain “mischievous elements”. It also said, “There are some mischievous elements who are deliberately trying to create an impression that those SPOs whose services have not been renewed due to administrative reasons, have resigned”.

However, J&K’s chief secretary B.V.R. Subrahmanyam said at a press conference here on Tuesday that the number of those SPOs who have quit is “negligible” and that the problem is restricted to certain areas only”.

“J&K has 30,000 SPOs and the number of those resigning is negligible. The problem is restricted to certain areas of south Kashmir only. There is by and large no such problem in north and central Kashmir,” he said.

He also said that all SPOs have been asked to take precautionary measures regarding their personal safety whereas the government is in the process of enhancing their honorarium. He said that the honorarium of SPOs was enhanced from Rs 3,000 to Rs 6,000 per month some time ago and the same will be hiked substantially. He, however, refused to give out figures and said that it be decided by the state administrative council headed by the governor in a few days.