Governor Rule not about deciding Art. 35A: J&K

The Constitution’s Article 35A gives the J&K Legislature the right to decide who are the “permanent residents” of the state. 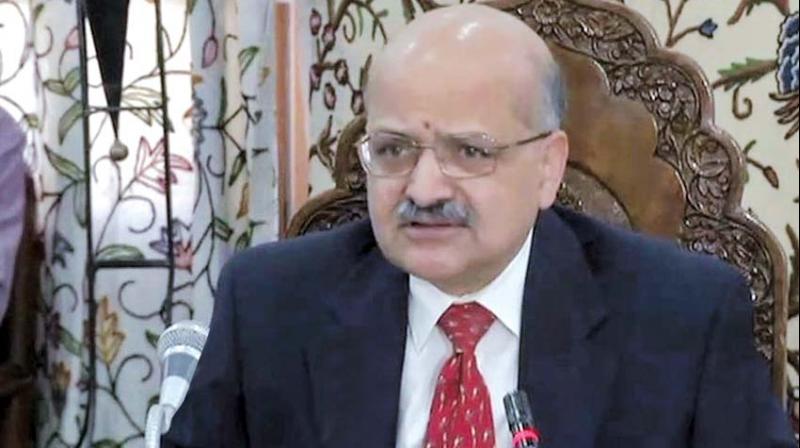 Srinagar: The governor’s administration in Jammu and Kashmir reiterated on Tuesday that only an elected government in the state should fight the case of Article 35A in Supreme Court (SC). Governor’s rule in the state, it said, is not about deciding the fate of Article 35A. It also said that there is no link between the deferment of hearing of a cluster of petitions challenging Article 35A in the apex court and the holding of local bodies’ elections in the restive state.

Addressing a press conference, J&K’s chief secretary B.V.R. Subrahmanyam said, “As far as Article 35A is concerned, the Governor has gone on record multiple times and he has clearly said that this is not an elected government and it would be right if an elected government within the state actually fights the case in the Supreme Court.” Replying to another question, he said “There have been multiple postponements of the hearings of Article 35A in the Supreme Court before and after the panchayat elections were announced. It is just accidental that the case is listed in January and the panchayat elections are to be completed before that.”

The Constitution’s Article 35A gives the J&K Legislature the right to decide who are the “permanent residents” of the state. On August 31, the Supreme Court deferred the hearing on petitions challenging the constitutional validity of Article 35A till January 2019. The three-member bench, headed by Chief Justice Dipak Misra, took this decision after being informed by attorney general K.K. Venugopal and additional solicitor general Tushar Mehta, representing the Centre and J&K government respectively, that in view of the impending eight-phased local body elections and the law and order situation in the state, the hearing be deferred. The contentious issue had led to protests and brought life in Kashmir to a standstill.

The court was hearing a petition filed by an NGO which claims that Article 35A is illegal as it was added to the Constitution without being presented to the Parliament. Supreme Court lawyer Charu Wali Khanna has also filed a petition challenging Article 35A on the ground that it is discriminatory against women.

Two major political parties of J&K — National Conference (NC) and Peoples’ Democratic Party (PDP) — and the CPI(M) questioned the wisdom behind the government seeking deferment of the hearing on Article 35A and urged the Centre as well as the Governor’s administration to clear their stand on the issue. These parties decided to boycott local polls saying the ground situation was not conducive for holding elections.

Mr Subrahmanyam said that the state’s stand on the legal challenge to Article 35A before the SC will remain consistent that an elected government should plead the case before the apex court.

“The stand of the Governor’s administration is going to be consistent in the Supreme Court that there are many serious complex issues which have to be discussed as far as Article 35A is concerned and these should not be discussed when Governor’s rule is in place,” he said and added, “These should be discussed when an elected government is in place, which will take a solid position in the Supreme Court. So there is absolute clarity that Governor’s rule is not about deciding Article 35A.”

J&K was placed under Governor’s Rule on June 20 after the collapse of PDP-BJP coalition government.

Mr Subrahmanyam, while speaking about the importance of local bodies’ elections in the overall growth of the state, said that `4,335 crore will be devolved to these bodies for developmental activities immediately after the conclusion of the ongoing poll process.