Bareilly Shahar Imam, 2 others have been booked on charges of threatening and hurting religious sentiments of woman. 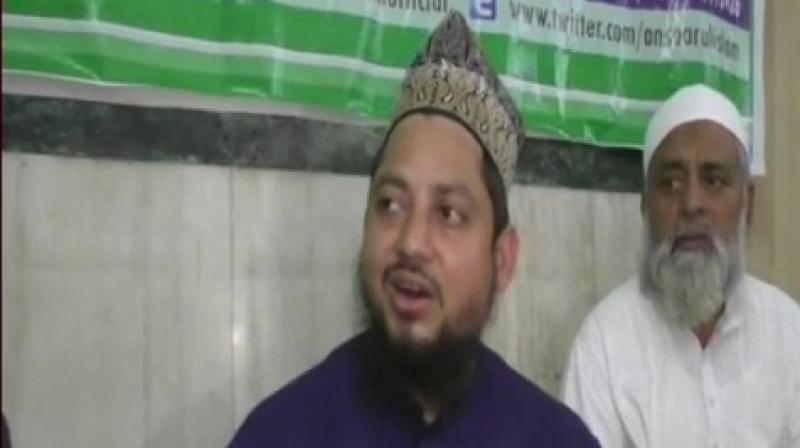 At press conference, Shahar Imam Mufti Khurshid Alam (L) said fatwa has been issued against Nida Khan for speaking against Islam and its practices. (Photo: ANI)

Bareilly: The Bareilly Shahar Imam, who issued a fatwa against a triple talaq victim, and two others have been booked on charges of threatening and hurting religious sentiments of the woman.

An FIR was registered on Wednesday on the basis of a complaint by social activist and triple talaq victim Nida Khan at the Baradari police station against her husband Sheeran Raza Khan, Shahar Imam Mufti Mohammad Khurshid Alam and Mufti Afzal Rizvi, police said.

The case was registered under IPC sections related to "deliberate and malicious acts, intended to outrage religious feelings of any class by insulting its religion, statements conducing to public mischief and intentional insult with intent to provoke breach of the peace", they said.

On July 16, at a press conference, the Imam of Bareilly's Jama Masjid said a fatwa has been issued against Nida Khan for speaking against Islam and its practices.

"Nida Khan has been ostracised from Islam because she has been regularly speaking against the religion and its practices. A fatwa has been issued against her," Alam had said.

Read: UP: Imam issued fatwa against woman for opposing triple talaq in Bareilly

After the fatwa, the security of Khan, who is the chairperson of Ala Hazrat Helping Society, was stepped up.

She also she came out in support of a nikah halala victim in the district.