Changing stance, Modi, Trump to answer 1 question each from reporters

Modi will be the first foreign dignitary to have a working dinner at the White House under the new administration. 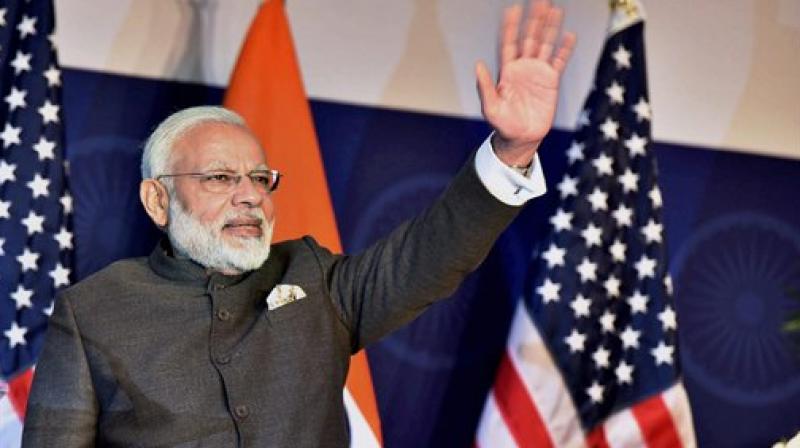 Washington: Before meeting over a working dinner at the White House on Sunday night, Prime Minister Narendra Modi and US President Donald Trump will address reporters.

Earlier, the US and India leaders had declared that they will not answer any questions. However, Modi and Trump have agreed to answer one question each, selected in advance, once a joint statement on their dinner meet is issued.

According to an NDTV report, Modi and Donald Trump will commence a 20-minute one-on-one interaction that will be followed by delegation discussions and a press briefing. Modi will be the first foreign dignitary to be hosted at a White House dinner by the Trump government.

United States President Donald Trump will host Prime Minister Narendra Modi on Monday for a first tête-à-tête aimed at building a personal rapport in spite of very real divergences between the two leaders, whether on climate change or immigration.

A senior Indian official said he hoped for "chemistry," while a US official said the two leaders had a lot in common, noting that Modi will be the first foreign dignitary to have a working dinner at the White House under the new administration.

Initial signs were upbeat, with President Trump describing Modi as a "true friend!" on Twitter, and the Indian leader posting that he "greatly looked forward" to the one-on-one.

Some commentators have suggested Modi and Trump should have a natural affinity, having both risen to power in part by castigating the traditional ruling elite while offering a strongly nationalistic vision.

"Both have portrayed themselves as outsiders, promised jobs and to make their countries respected (again), and used or taken advantage of identity politics," wrote Tanvi Madan of the Brookings Institution.

Both prefer to reach out directly to their base via social media, where PM Modi's nearly 31 million Twitter followers rival Trump's 32 million.

Relations between the world's two largest democracies had warmed under Trump's predecessor Barack Obama, as India sought greater foreign investment and trade ties. But it was not long after Trump's election that obstacles emerged on issues such as trade and visas for Indians wanting to work in the United States.

A proposed overhaul of H-1B visas -- used by thousands of Indian software engineers to work in the United States -- has caused concern in New Delhi.

Then the US President accused India of seeking to profit from the Paris climate accord as he announced the US withdrawal from the deal this month -- drawing sharp denials from New Delhi.

After an Oval Office meeting mid-afternoon, the leaders will dine together at the White House, though no press conference is scheduled. That decision -- a contrast with high-profile visits from other leaders including Japanese Prime Minister Shinzo Abe -- may reflect a White House effort to avoid a flurry of questions over the probe into suspected Russian meddling in the 2016 election, which has dogged the young Trump administration.

On Sunday, Narendra Modi told top American executives that India is a business-friendly country of "minimum government" -- a message expected to resonate with Mr Trump, who has proposed streamlining what he calls business-hampering US regulations and cutting the budgets of several US government agencies.

His protectionist instincts, however, are at odds with India's efforts to boost exports and encourage Western manufacturers to "Make In India" -- Modi's flagship scheme.

Modi's core goals for the meeting, analysts say, are simple. "Ensure that India is on the US' radar, and that the new US administration maintains policy continuity with the last one," said Shailesh Kumar of the Eurasia group.

"PM Modi will arrive at the White House with a full-on charm offensive aimed squarely at Donald Trump," he said.

"Modi will try to give Trump some tweetable wins," Tanvi Madan said, which in the defense arena could see the announcement of a $2 billion deal by US manufacturer General Atomics to supply unarmed drones to India.

The White House refuses to comment on US arms sales before Congress has been officially notified, but a senior administration official underscored that "this defense relationship is extremely important for both countries".

Regional security is expected to be high on the agenda as Washington considers deploying up to 5,000 extra troops in Afghanistan to help local forces fighting insurgent groups and seeks to encourage what an administration official describes as India's "positive role" in the country.

President Trump's administration has meanwhile indicated it could take a tougher stance on Pakistan over harbouring terrorist groups.