India   All India  26 Mar 2017  Terrorists barge into cop's home in J&K, kidnap his son and nephew, set his car ablaze
India, All India

Terrorists barge into cop's home in J&K, kidnap his son and nephew, set his car ablaze

Meanwhile, 2 terrorists snatched a loaded AK-47 assault rifle from a cleric's PSO and attacked him with chilli powder. 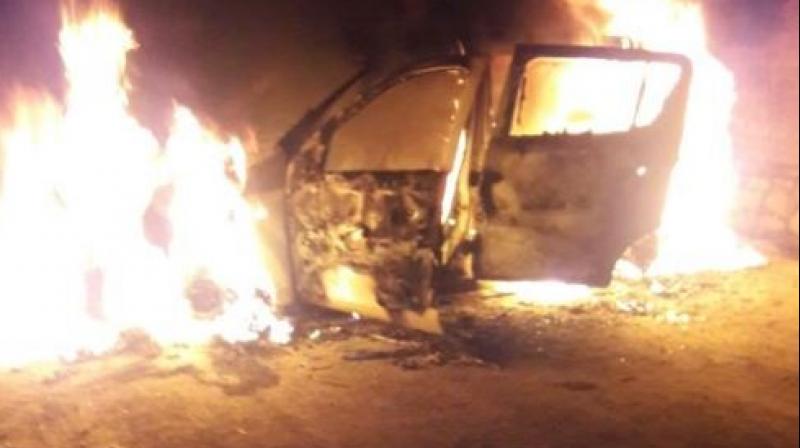 Srinagar: In yet another case of policemen being threatened in the Valley, militants barged into the house of a sub-inspector last night in Budgam district, took his son and a nephew hostage, ransacked the house and later set a car ablaze.

The militants drove away in the car with the two boys but later let them off and set the vehicle on fire, police said.

The incident came barely three weeks after militants had barged into the house of a senior police officer in Shopian in South Kashmir and ransacked his house, sending shockwaves among police officers fighting militancy for last 26 years.

The militants entered the house of Sub Inspector M Subhan Bhat and started ransacking his house in Chadoora area of the district in central Kashmir, official sources said, adding that they later took his son and a nephew as hostage and drove away in the car.

According to police sources, the militants said they wanted to kill the officer, who is currently posted at the Baramulla district jail where militant-turned separatist leader Masarat Alam is lodged.

The militants threatened the two boys and fired several rounds in air before setting the car ablaze, they said.

Director General of Police S P Vaid told PTI that stern action would be taken against those responsible for the incident.

"It's the most unfortunate incident to have happened. The terrorists are feeling the heat and stooping so low. Our humane approach should not be seen as our weakness. I will ensure welfare of every personnel in my force and such incidents will be dealt with an iron hand," he said.

Police has launched a manhunt to nab the people after gathering information about the militants from the kins and neighbours.

Director General of Prisons S K Mishra told PTI that he has called for a review meeting tomorrow to ascertain the safety of his personnel and their families guarding various jails in the state.