Governors unfurled the tricolour in their respective states and outlined its achievements. 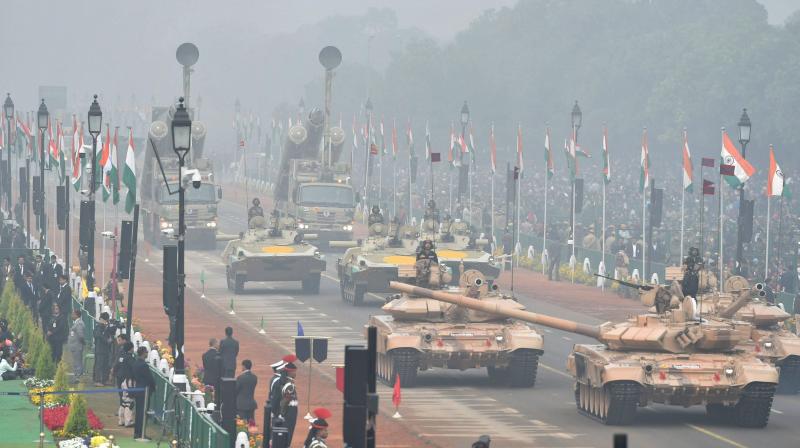 New Delhi: Colourful tableaux, disciplined parades, and enthusiasm and excitement among students marked the day as patriotic fervour gripped the nation on the 69th Republic Day which passed off peacefully amid tight security.

Governors unfurled the tricolour in their respective states and outlined its achievements while also urging the citizens of the Republic to take pledge to meet the challenges ahead.

In Kashmir, all Republic Day programmes, including the main event in Srinagar, were uneventful amid heightened security measures in view of intelligence reports suggesting that militants might target the functions.

"The Republic Day functions at all district headquarters passed off peacefully," a senior police officer said. 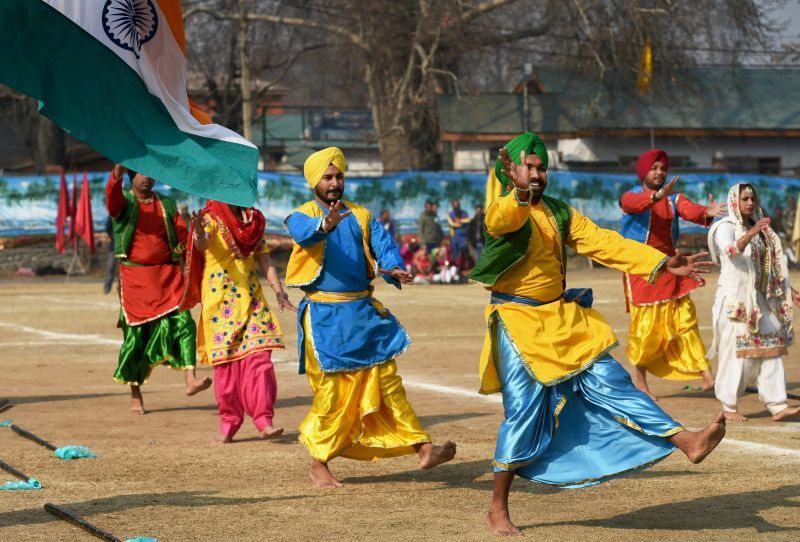 In Dehradun, Uttarakhand Governor K K Paul hoisted the tricolour and reminded the citizens the Constitution has enlisted fundamental duties alongside the Fundamental Rights.

In Uttar Pradesh, energy and patriotism marked the celebrations with the main function being held at the state capital Lucknow. At Vidhan Bhawan, Governor Ram Naik took the salute of the parades put up by the army, central forces and school children.

The Governor on the occasion asked people to re-dedicate themselves to the service of the nation.

Meanwhile, two Saudi nationals and an Indian, carrying a satellite phone, were detained in Pokhran town of Rajasthan for allegedly hatching a conspiracy to disturb peace and harmony, police said.

Jaisalmer Superintendent of Police Gaurav Yadav said they will be interrogated by a joint team of military intelligence and Jaisalmer police. Possession of satellite phone without authorisation is not allowed in the country.

Bihar Governor Satya Pal Malik hoisted the tricolour at the famous Gandhi Maidan at Patna on the occasion and said the state was working for the development of all sections of the society.

The government will take measures to empower the youth and the marginalized sections of the society, he said, after taking a salute at the marchpast by contingents of Bihar police and central armed forces.

Later in the day, the CM hoisted the flag at his official residence and at a "Mahadalit Tola" in Punpun block of rural Patna.

The tricolour was also unfurled at the offices of political parties like the BJP, the Congress, the RJD and the JD(U) besides government establishments and educational institutions.

In neighbouring Jharkhand, after unfurling the tricolour Governor Droupadi Murmu said the state is second only to Gujarat in terms of growth rate in the country.

West Bengal Governor K N Tripathi hoisted the tricolor at Red Road in Kolkata. He also presided over an hour-long march past of the armed forces, police forces and civilians, including school students.

Assam Governor Jagdish Mukhi said the state government is working on a Rs 1,500-crore project for protection measures against flood and erosion problem.

Hoisting the tricolour on the occasion, Mukhi said, "The state government has embarked upon a project under the nomenclature 'Assam: Flood, Erosion and River Management Modernisation Project' at a tentative cost of Rs 1,500 crore."

Maharashtra Governor Ch Vidyasagar Rao addressed a gathering at Shivaji Park in Mumbai after reviewing an impressive parade to mark the day.

In Telangana, Governor E S L Narasimhan in his Republic Day speeh said the state government would introduce a separate budget for agriculture from the next financial year.

While, Goa Governor Mridula Sinha said although tourism was generating revenue in the state, it has also brought with it issues like narcotics and human trafficking.

"The government is committed to fight these evils. I am hopeful that joint efforts by the people and the government will weed out these evils from the state," she said at the Republic Day function in the state capital of Panaji.

In his speech, Mizoram Governor Lt Gen (Retd) Nirbhay Sharma congratulated the people of the state, NGOs, religious institutions and media for being committed to protect peace and harmony.

Addressing the Republic Day function at the Assam Rifles ground here after unfurling the tricolour, Sharma said the collective efforts of law-enforcing agencies and the commitment of the civil societies and voluntary organisations made it possible for Mizoram to maintain its status as one of the more peaceful states of the country.

While in his speech, Arunachal Pradesh Governor Brig (Retd) Dr B D Mishra exhorted the people to contribute to the remarkable growth plan being carried out by the state government to put the state in the highest-growth trajectory.

The day was celebrated across Odisha amid tight security as Governor S C Jamir unfurled the tricolour on the Mahatma Gandhi Road in the state capital.

In his speech, Tripura Governor Tathagata Roy congratulated the people for maintaining 'its long tradition' of peace and harmony and said the state should uphold democratic values under all circumstances.

In Karnataka, Governor Vajubhai Vala urged the people to build a strong nation on patriotic sentiments and scientific temperament as he addressed the gathering after unfurling the tricolour at the historic Manekshaw Parade ground.

Members of the armed forces and uniformed personnel took out an impressive march past on Kamaraj Salai along the famous Marina beach here, even as a good number of public had turned up to witness the proceedings. 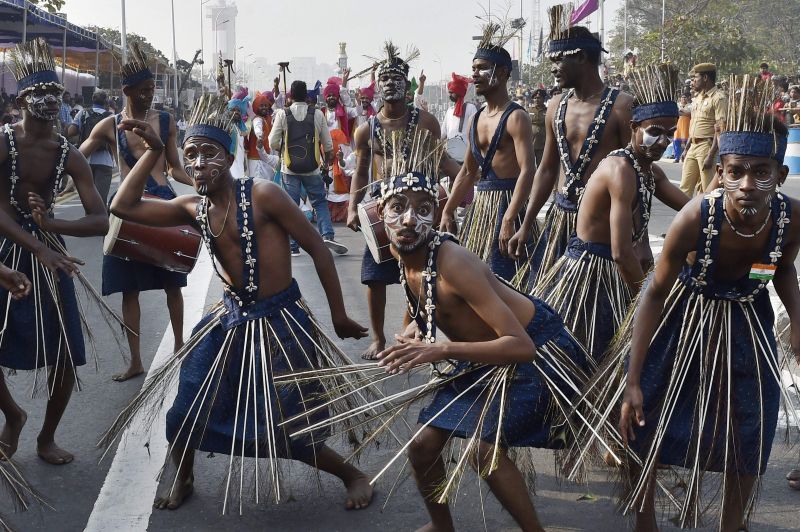 Cultural shows depicting India's diversity were presented by college students and artistes, while the state government showcased its schemes and projects covering various departments by way of floats.

The floats predominantly featured the pictures of late Chief Ministers and AIADMK stalwarts, MG Ramachandran and J Jayalalithaa, besides those of the incumbent, K Palaniswami. 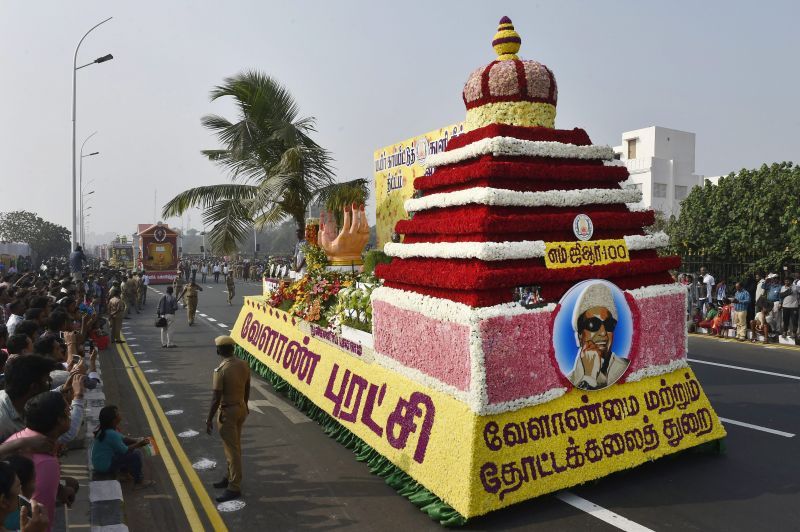 A ceremonial parade was held at the naval base, Southern Naval Command (SNC) in Kochi to commemorate the nation's 69th Republic Day.