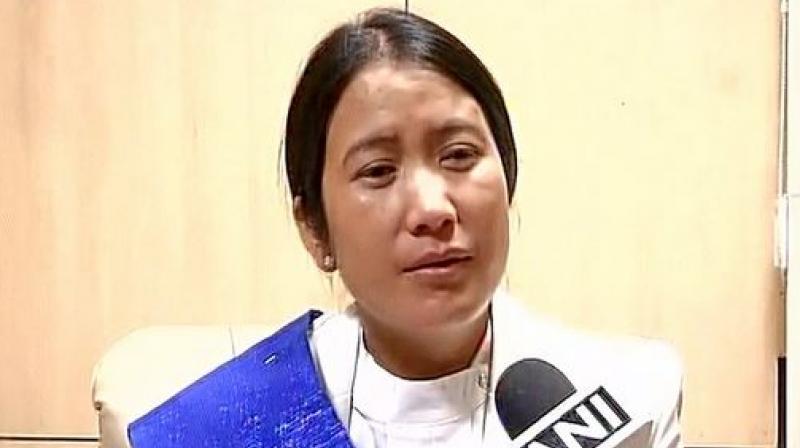 New Delhi: Notwithstanding death of her husband, a proud but poignant Chasen Lowang, widow of Havildar Hangpan Dada of the Assam Regiment, who was awarded Ashok Chakra today, wants her son and daughter to join the army and to be brave like their father.

Holding back her tears from rolling down her moist eyes, Lowang felt proud as she received the Ashok Chakra, highest peacetime gallantry award, from President Pranab Mukherjee here at the Republic Day parade.

Dada had laid down his life after single-handedly killing four terrorists in Jammu and Kashmir on May 26 last year.

"It is such a big award. I am so proud of my husband. I am happy but sad at the same time," said Lowang speaking to PTI here at an Army establishment hours after she received the award.

She underlined that the award was a tribute to every soldier who is fighting for the country in harsh conditions.

Noting that her children are too small to understand the gravity of the situation, Lowang said, "I want them to join the force and become an officer. They should replace their papa in the army and become a big officer".

She said she does not cry in front of her children and does only in the adjoining room of her house.

"I want my children to be brave. I have to be brave for them. I have to ensure that they study hard and join the army," she said.

Lowang pointed out that Dada used to tell the children to join the army as officers and hence will try and admit her boy to the Sainik School.

Talking about the support system for her, she said many people have come forward and expressed their love.

"I am not alone. He (late Dada) is watching me and my two kids...I want them to be strong like their father," she said.

In a firefight in Naugam sector on May 26 last year, when his section was pinned down by heavy and accurate fire, the soldier closed in towards terrorists hiding behind rocks and boulders, saving the lives of his comrades.

With scant care for his life, he displayed exemplary courage and presence of mind and killed two terrorists at close range. In the exchange, he was grievously injured.

Undeterred, he went after the remaining terrorists.

"In the process, he came face to face with the third terrorist whom he killed in hand-to-hand combat before making the supreme sacrifice. His action led to elimination of the fourth terrorist," the citation said.