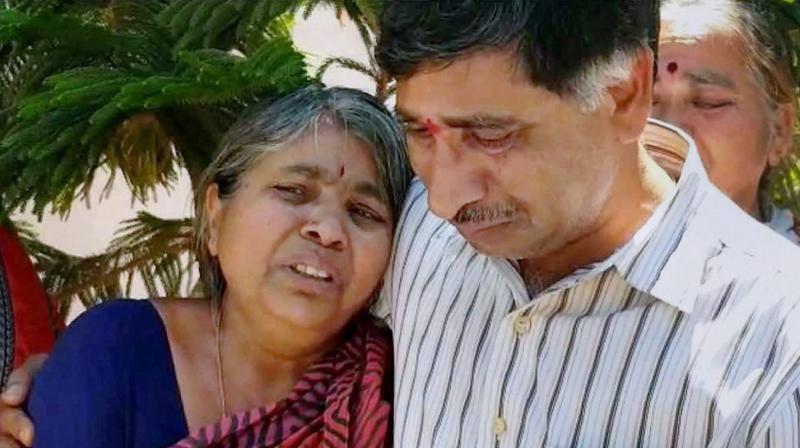 Hyderabad: A pall of gloom descended on the residence of engineer Srinivas Kuchibhotla at Bachupally here on Friday when his parents and family learnt about his death after an American Navy veteran yelling “terrorist” and “get out of my country” opened fire on him in the US.

Srinivas Kuchibhotla (32), working at GPS-maker Garmin headquarters in Olathe, died of bullet injuries in hospital while his Indian colleague Alok Madasani was critically injured when the 51-year-old shooter, Adam Purinton, started hurling racial slurs following an altercation on Wednesday night in the US.

Some cousins of Srinivas, who met and consoled his parents and other family members, told reporters that after completing his B. Tech from the city, Srinivas left for the US in 2005 for M. Tech. “Four years back he got married. He was highly appreciated by his managers at his workplace. In 2014, he shifted to Garmin company. We have been told the shooting is due to hate crime. Srinivas was a very good person... We miss him,” an inconsolable Krishnamohan (cousin) said. “This is a hatred kind of murder (hate crime attack). We normally won’t answer when such people shout. I have myself worked in the US and I know it. I think my cousin also might have not answered back to him. Probably, after (US President Donald) Trump we are seeing this... We feel racist attacks have increased. Previously this was not the scene. There were incidents once in a while, now it has become very frequent. It happened in our house this time. It’s very sad,” Venu Madhav, another cousin, said.

However, they thanked external affairs minister Sushma Swaraj for immediate response in the matter by sending two officials for completing the formalities.

“Srinivas’s brother stays in Dallas. I co-ordinated with my friends and asked them to help them out. Till now the body has not been given to us and we are expecting the body to be handed over by tonight,” he said.

Meanwhile, Alok’s father Jaganmohan Reddy, who stays in Chaitanyapuri area, said his elder son who also stays in the US called him on Friday morning and informed him about the shooting incident.

“I have spoken to Alok... He is doing fine... I am planning to go to the US and meet him,” Jaganmohan told PTI.