India   All India  25 Jan 2018  Our people not only builders of Republic, but its pillars: President on R-Day eve
India, All India

Our people not only builders of Republic, but its pillars: President on R-Day eve

Kovind asks people to build a nation where girls get equal treatment like boys in terms of education, healthcare, and equal opportunities. 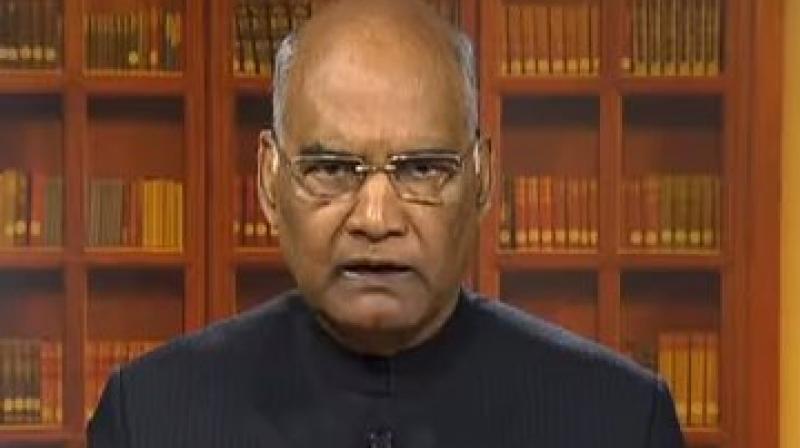 Kovind pays tributes to soldiers who protect the nation, to farmers who feed us, to police and paramilitary forces who provide us security, to mothers who take care of us, and to doctors who treat people who are ill. (Photo: ANI | Twitter)

President Kovind called for a "civic-minded" society where one can disagree with views even which had a historical context without mocking the other person's dignity, comments that come in the backdrop of escalating row and violence over Bollywood film Padmaavat.

In his first Republic Day-eve address to the nation, the President also said that institutions should be "disciplined and morally upright", adding they are always "more important" than the individuals in office. The institutions should also respect their "fraternal relationship" with other institutions, he added.

Touching on other issues, Kovind said it is our "sacred obligation" to eliminate the curse of poverty in the shortest possible time. "This is non-negotiable for the Republic."

"A civic-minded nation is built by civic-minded neighbourhoods, whether in our cities or our villages -- where we respect the next-door person's space, privacy and rights. Where we do not inconvenience our neighbours while celebrating a festival or while resorting to a protest or on any other occasion. Where one can disagree with another viewpoint or even with a historical context - without mocking a fellow citizen's dignity and personal space. This is fraternity in action," the President said.

The comments come at a time when several parts of the country have witnessed stiff opposition over Padmaavat with some fringe groups alleging that the film distorts their history and defames Rajput queen Padmaavati. The film hit the screens on Thursday amid tight security.

In his speech, the President highlighted the struggle of millions of people led by Mahatma Gandhi in getting independence of the country which was followed by efforts by them in writing the Constitution for the country.

"This was a period of constant striving of dedication, determination and commitment to improving our country. And setting right the aberrations of our society," he said and drew a parallel with today's time saying, "today, we are at a

similar juncture. We have achieved a lot as a nation, but much remains to be done. We need to work on this in the spirit of the generation that gave us our Republic."

He said the country cannot be satisfied without meeting the basic needs and essential dignity of our less well-off people.

"I refer to those from a less privileged socio-economic background, from the weaker communities and from families that still live at the edge of poverty. It is our sacred obligation to eliminate the curse of poverty in the shortest possible time. This is non-negotiable for the Republic," he emphasised.

Observing that the "promise of a developed India beckons us", Kovind said this is the new stage of our nation building project on which we have embarked. "This is the Republic that our young people need to take forward and enhance in keeping

Calling for reforms, upgradation and enlarging the education system, the President said over 60 per cent of the country's population are below the age of 35. "It is in them that our hopes lie. We have made strides in spreading literacy; now we must expand the frontiers of education and of knowledge. Our aspiration must be to reform, upgrade and enlarge our education system and to make it relevant to 21st century realities of the digital economy, genomics, robotics and automation..."

Asking children to make innovation as their "obsessive goal", he said the schooling system has to encourage children to think and to tinker, not just to memorise and reproduce.

"We have made strides in tackling hunger, but the challenge of malnutrition and of bringing the right micronutrients to the plate of every child is still there. This is important for both physical and cognitive development of our children and for the future of our country. We simply have to invest in our human capital," he said.

Calling for renewal of spirit of philanthropy, he asked people to collate their privileges and entitlements and then look at less-privileged members of a similar background, those who are starting off from where they once started.

He said the highest stage of India's nation building project is to contribute to building a better, composite and cohesive world at peace with itself and at peace with nature which is the ideal of Vasudhaiva Kutumbakam -- of the World being One Family.

"It is an ideal that may sound impractical in today's times of tensions and of terrorism. But it is an ideal that has inspired India for thousands of years and that ideal can be felt in the very texture of our constitutional values."

He said in 2020, the nation will complete 70 years of being Republic and in 2022, India will have completed 75 years of independence.

"These are special occasions and we must strive, in the manner of the leaders of our national movement and the framers of our Constitution, to build the edifice of a better India -- an India where each and every citizen will be able to realise his or her full potential, ann India that will reach its deserved pedestal in the 21st century."

The President earlier on Thursday received the ASEAN heads of state and government at the Rashtrapati Bhavan and hosted a lunch in their honour.

The president, on the occasion, said that India's 'Act East policy' reinforces its ancient links with Southeast Asia through enhanced political, security, economic and cultural ties.

"In this context, India greatly values ASEAN's role as a proponent of peace, stability and prosperity in the region," Kovind said and reiterated India's support to ASEAN's unity and centrality.

"We stand shoulder-to-shoulder with ASEAN in pursuit of a rules-based regional architecture that is open, inclusive, balanced and equitable," he said.

The president said that India and ASEAN are bound by history and geography.