The defence minister had on earlier occasions too urged the Naxalites to give up violence and come for talks. 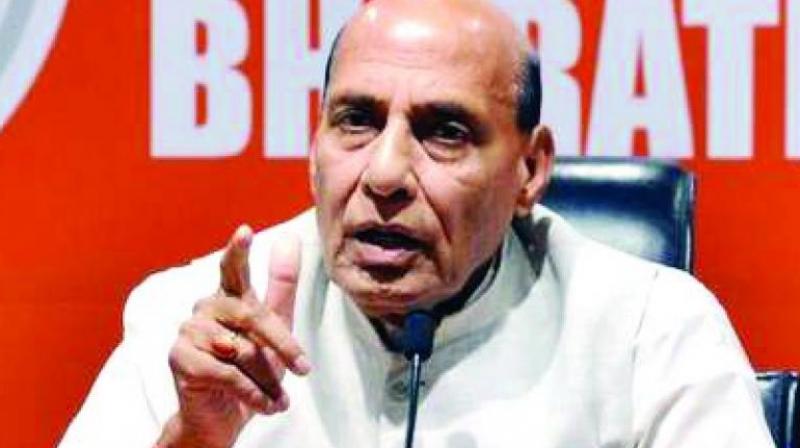 Four policemen and two persons, including a local BJP leader, were killed on friday in a Naxal attack. (Photo: File | ANI)

Pandu: Defence Minister Rajnath Singh on Sunday warned Naxalites to abjure violence, saying a befitting reply would be given if they did not do so.

The warning comes in the wake of violence by the left-wing extremists in Latehar and Palamau districts of Jharkhand since Friday, in which four policemen and two persons, including a local BJP leader, were killed.

"I have seen a couple of incidents happening in Jharkhand. You should be rest assured that the BJP governments at the Centre and the state will not allow anybody use guns. A befitting reply will be given to them," Singh said at a poll meeting at Pandu under Bishrampur constituency.

The rebels had also burnt down two earthmoving machines in Lohardaga district.

All three districts are set to go to polls in the first phase on November 30.

The defence minister had on earlier occasions too urged the Naxalites to give up violence and come for talks, he said.

Recalling his meeting with council of heads of government (CHG) of Shanghai Cooperation Organisation (SCO) in Tashkent early this month, the union minister said, the world is united to root out terrorism and except Kashmir, no big terror attacks had occurred in the rest of the country in the last five-and-a-half years.

Assembly elections in Jharkhand will be in five phases between November 30 and December 20.

Bishrampur is going for polls in the first phase and the BJP has fielded state's Health Minister Ramchandra Chandravanshi from the seat.