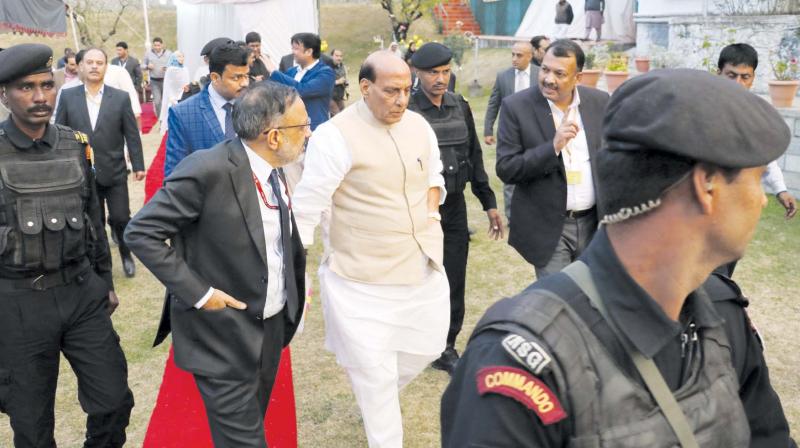 Srinagar/Delhi: Home minister Rajnath Singh on Tuesday said India is ready to hold talks with anyone, including Pakistan, but terror and dialogue can never go together.

While addressing a press conference here at the end of his day-long visit to Srinagar for an on-the-spot assessment of the security situation in Jammu and Kashmir, the home minister said,  “There is no bar on holding dialogue, but there is a condition from our side for it. They (Pakistan) should, at least, see that they can’t sponsor and promote terrorism directed against India and, at the same time, talk about holding dialogue with us. The two things can’t go together.”

The home minister’s assertions came a day after Pakistan’s Prime Minister Imran Khan demanded a plebiscite and claimed that atrocities are being perpetrated in J&K.

“We made broad effort to improve relations with Pakistan. Our Prime Minister broke all protocols and went to Pakistan to meet its Prime Minister and his family with a view that they are our neighbours and we should have good neighbourly relations with them. But nothing positive came from their side,” Mr Singh said.

The home minister said that Pakistan should assure India that it will not do anything to promote terrorism.

Asked if there was any initiative to hold talks with the separatists, Mr Singh said that the government will talk to anyone who is willing to enter into a dialogue, but refused to elaborate.

“The government will not shy away from talks. We have been saying this time and again, anyone who wants to talk, we are ready,” he said.

Expressing satisfaction over the recent municipal elections, Mr Singh said that panchayat elections will also be held in the state soon in a peaceful manner.

During his meetings with security and intelligence agencies in Srinagar, Mr Singh was briefed on how Pakistan-based terror groups are planning to infiltrate 150 militants before the onset of winter.

Following specific inputs, the home minister directed the Army and the BSF to remain on high alert to foil any infiltration attempts. These details, sources added, were being taken extremely seriously since reports suggest that militants are camping close to the border, waiting for an opportunity to enter India with assistance from Pakistani border guarding forces.

The home minister also asked the security agencies to ensure that lives of innocent citizens are protected even during an ongoing operation. These instructions come in the wake of the death of seven civilians in Kulgam and Anantnag areas.

Mr Singh expressed his regrets over the killing of seven civilians in a blast at the encounter site in Laroo village of southern Kulgam district on Sunday. “I want to say that the incident that occurred at Kulgam was unfortunate. We feel pain over it,” he said and appealed to people not to go near sites where operations by the security forces are in progress. He announced `5 lakh compensation to the next of kin of each civilian killed.

On the eve of Mr Singh’s visit, the riot police and Central armed forces sealed Srinagar’s historic central square Lal Chowk to hold back a protest sit-in planned by an alliance of key separatist leaders to protest against the civilian killings during counterinsurgency operations by the security forces.