The home minister said that prior approval of the President was sought before introducing the ordinance in September. 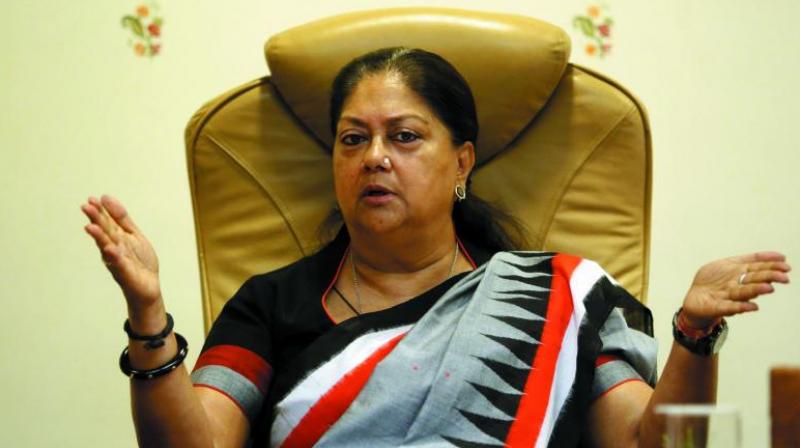 Amid an uproar from the opposition Congress, the Criminal Laws (Rajasthan Amendment) Bill was tabled in the Assembly by Home Minister Gulabchand Kataria on Monday to replace an ordinance promulgated on September 7. (Photo: PTI/File)

Jaipur: Facing flak from various quarters, the Rajasthan government on Tuesday referred a controversial bill, which seeks to protect public servants and judges from prosecution without its prior sanction, to a select committee of the Assembly.

Amid an uproar from the opposition Congress, the Criminal Laws (Rajasthan Amendment) Bill was tabled in the Assembly by Home Minister Gulabchand Kataria on Monday to replace an ordinance promulgated on September 7.

At the beginning of the Question Hour on Tuesday, Parliamentary Affairs Minister Rajendra Rathore informed the House that Chief Minister Vasundhara Raje had held a meeting of ministers on Monday night to discuss the bill and that the home minister would apprise the House of the development.

The home minister said that prior approval of the President was sought before introducing the ordinance in September.

Independent MLA Manik Chand Surana had on Monday raised the point that no approval of the President was attached with the bill.

As the opposition MLAs rushed into the Well of the House demanding withdrawal of the bill, Kataria said the government would consider the suggestions put forward by the members.

He then moved a proposal to refer it to the select committee. The proposal was passed by the Assembly.

The select committee has been asked to submit its report in the next session.

The Criminal Laws (Rajasthan Amendment) Ordinance, 2017, seeks to protect serving and former judges, magistrates and public servants in the state from being investigated for on-duty action, without its prior sanction.

It also bars the media from reporting on such accusations till the sanction to proceed with the probe is given by the government.

The move has been severely criticised by the opposition Congress and National People's Party (NPP) and senior BJP MLA Ghanshyam Tiwari.

The Editors Guild of India too opposed the "harmful ordinance" and demanded its withdrawal.

Earlier on Tuesday, BJP MLA Ghanshyam Tiwari protested when he was not allowed to raise a point of order. He objected to Speaker Kailash Meghwal giving permission to the home minister for giving his statement during the Question Hour.

After the proposal for referring of the bill to the select committee was passed, the Speaker called for listed questions but the Congress members raised the issue of farm distress.

Congress Deputy Whip Govind Singh Dotasara said the government was not serious on the issues of farmers and demanded agriculture loan waiver.

Amid continued protest and disruption during the Question Hour, the Speaker adjourned the House till 1 pm.

In the 200-member Rajasthan Assembly, BJP has 160 MLAs while the  Congress has 24 members.