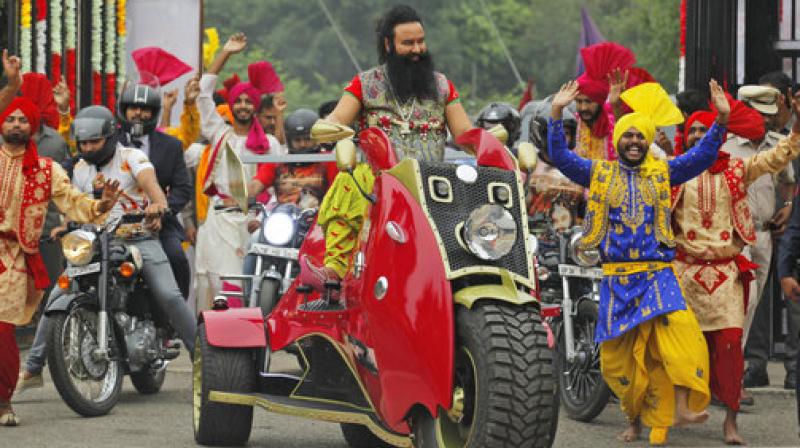 The sexual exploitation case was registered against the Dera chief in 2002 by the CBI on the directions of the Punjab and Haryana High Court after anonymous letters were circulated about the alleged sexual exploitation of two 'sadhvis' (female followers) by Ram Rahim Singh. (Photo: AP)

Chandigarh/New Delhi: Tension prevailed in normally peaceful Panchkula on Thursday, a day ahead of the expected verdict in a sexual exploitation case against Dera Sacha Sauda chief Gurmeet Ram Rahim Singh, thousands of whose followers have descended on this Haryana town.

Fearing trouble, especially if the verdict goes against the controversial Dera chief, thousands of jawans, including 15,000 paramilitary troops, have been deployed in sensitive areas across Punjab and Haryana.

Mobile internet services have also been suspended for 72 hours in both the states and their joint capital Chandigarh while authorities are keeping a close watch on social media posts also, officials said. The authorities also restricted movement of trains and buses towards Panchkula.

However, in what appeared to be some relief for a stretched administrative machinery, Ram Rahim Singh said on Thursday that he would appear in person before the special CBI court on Friday while appealing to his followers to maintain peace.

"I have always respected the law. Even though I am having a backache, still abiding by law, I will go to court (tomorrow). I have full faith in God. Everyone should maintain peace," the sect chief tweeted.

The sexual exploitation case was registered against the Dera chief in 2002 by the CBI on the directions of the Punjab and Haryana High Court after anonymous letters were circulated about the alleged sexual exploitation of two 'sadhvis' (female followers) by Ram Rahim Singh.

The Dera chief, however, has denied these charges.

In Panchkula near Chandigarh, thousands of Dera supporters, including women and elderly, arrived and were camping in parks and open spaces. More 'premis', as the Dera followers are known, were pouring in. 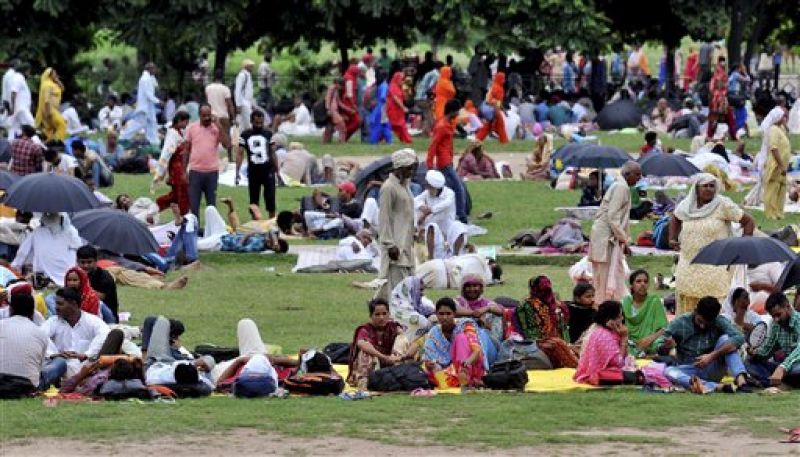 To ensure there is no trouble, there was heavy police deployment as well.

Dera followers have also been arriving in great numbers at the sect headquarters at Sirsa in Haryana.

The Centre has rushed as many as 170 companies of paramilitary forces to Punjab and Haryana to assist the police forces in maintaining law and order, a senior Union home ministry official said. One paramilitary company comprises over 100 personnel.

"The central government has assured all possible help to the two state governments in dealing with any situation as a large number of followers of the Dera chief have started arriving in Panchkula, Chandigarh and nearby areas," said another home ministry official.

We are in constant touch with the governments of Punjab and Haryana and have given them adequate forces, he added.

Flag marches were carried out by security forces in Panchkula, Sirsa, Hissar and other places while many hospitals were also put on alert as a precautionary measure, the official said.

The police were keeping a close watch on social media, particularly WhatsApp groups, Facebook and Twitter, and have asked people not to spread rumours, he said.

Bus services on many routes was also suspended as a precautionary measure.

A notification in this regard was being issued, he added.

According to a Northern Railway spokesperson, 22 trains to Punjab and 7 to Haryana have been cancelled. The trains would have made 74 trips over the next four days.
"We had received a request from the Haryana government to cancel trains in the state in view of apprehensions on the law and order front," he said.

The spokesman said no such request was received from the Punjab government.

A joint control room of Haryana and Punjab would be set up in sector-9, Chandigarh where a police officer each from both the states would be deployed for better coordination, he said.

Niwas said that as per earlier orders, Section 144 was imposed in all districts. He added that Dera followers were being flushed out from sensitive areas.

Niwas said that ten senior IPS officers had been deployed and two Director General level officers of the police department were also focusing to ensure peace and maintaining law and order in the state.

Prohibitory orders have already been clamped in Punjab, Haryana and Chandigarh.

Earlier, the Chandigarh home department had declared the cricket stadium in Sector 16, which is associated with early training days of legendary Kapil Dev, as a 'temporary jail on August 25', the day of the verdict.

The Punjab government has declared that its offices situated at Chandigarh would remain closed on August 25, the day on which a court verdict is expected in a sexual exploitation case against Dera Sacha Sauda sect chief Gurmeet Ram Rahim Singh.

An official spokesperson said that all the offices, boards, corporations, agencies and public sector organisations of the Punjab government will remain closed tomorrow.
A notification in this regard has been issued, he said.