India   All India  24 May 2019  Several students dead, injured as fire breaks out in Surat
India, All India

Several students dead, injured as fire breaks out in Surat

The fire broke out in a shopping complex where the students studied in a coaching centre. 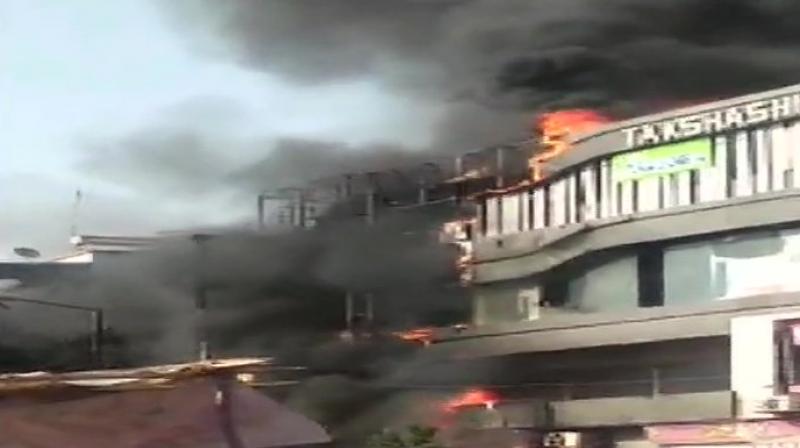 The primary reports state that the fire was caused due to short circuit and spread rapidly engulfing the entire building. (Photo: ANI Twitter)

Surat: At least 20 students of a coaching class diedoilo and several others injured as a fire broke on Friday afternoon in a commercial complex which housed the coaching centre in which the students were attending classes.

The fire engulfed the third and fourth floor of the Takshashila Complex which is a commercial centre.

It was reported that some students died as they jumped off the building in a bid to save their lives while others died because of smoke.

The primary reports state that the fire was caused due to short circuit and spread rapidly.

A fire official said 19 fire tenders and two hydraulic platforms were pressed into service to douse the fire.

Locals were seen helping in the rescue operation to save stranded students as well as other occupants of the building.

"Students on fourth and third floor jumped off to the ground to save themselves from fire and smoke. Many have been rescued and sent to a hospital. The operation to douse the fire is on," said a fire official.

Prime Minister Narendra Modi shared his grief and condolences. He also said that the Gujarat government shall assist in the rescue efforts.

Extremely anguished by the fire tragedy in Surat. My thoughts are with bereaved families. May the injured recover quickly. Have asked the Gujarat Government and local authorities to provide all possible assistance to those affected.

Gujarat Chief Minister Vijay  Rupani has ordered an official enquiry into the incident.

The state government has announced a compensation of Rs 4 lakhs for the family of the deceased.