America’s President Donald Trump has a packed schedule the moment he lands in India on Monday morning. 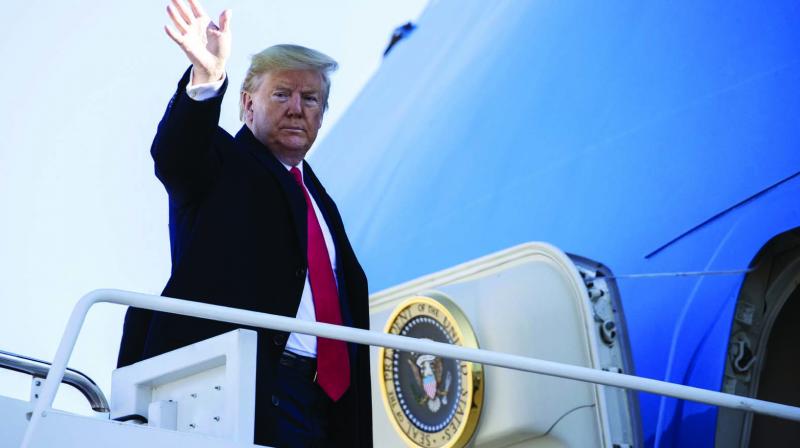 President Donald Trump waves as he boards Air Force One to depart for India on Sunday at Andrews Air Force Base near Washington. (Photo: AP)

New Delhi/Washington: “Namaste Trump” in Ahmedabad, a view of the majestic Taj Mahal in Agra and bilateral talks with Prime Minister Narendra Modi in New Delhi — all in 36 hours. America’s President Donald Trump has a packed schedule the moment he lands in India on Monday morning.

As President Trump left Washington for India on Sunday, US officials said the visit will “demonstrate strong and enduring ties” between the two largest democracies and significantly ramp up the defence and strategic ties. Mr Trump is accompanied by First Lady Melania, daughter Ivanka, son-in-law Jared Kushner and the top brass of his administration.

“I had committed to this trip long time ago. I look forward to it. I hear it’s going to be a big event..The biggest event they ever had in India. That’s what the Prime Minister told me. It’s the biggest event they ever had. It’s going to be very
exciting. I am going to be there for one night,” said the President in response to a question. “We are wheels up for India, where @realDonaldTrump & @FLOTUS have a full agenda building upon our many shared values and strategic/economic interests. Looking forward to a trip meant to further demonstrate the strong and enduring ties between our two countries!” the White House tweeted. Mr Trump will have a brief refuel stopover in Germany en route to India.

This is Mr Trump’s first visit to India as US President. Prime Minister Modi on Sunday tweeted saying India was looking forward to welcoming Mr Trump. “It is an honour that he will be with us tomorrow, starting with the historic programme in Ahmedabad!” the PM tweeted, tagging Mr Trump.

Both Ahmedabad and New Delhi are likely to see massive traffic curbs on Monday and Tuesday due to the visit and the hotels in these two cities have been brought under unprecedented security cover. Snipers, anti-sabotage teams etc are placed on top of the buildings and his route.

On Monday, the President’s tour begins with a visit to Mahatma Gandhi’s Sabarmati Ashram in Ahmedabad, from where he will go to the newly-built Motera Cricket Stadium where Mr Trump and Prime Minister Modi will address a major gathering during the “Namaste Trump” event.

Mr Trump, along with wife Melania Trump, daughter Ivanka and son-in-law Jared Kushner, will later in the day visit Taj Mahal before reaching New Delhi late on Monday evening. The Taj Mahal and its surroundings have been given a massive facelift to impress the VIP visitors.

President’s Trump’s official engagements with the Indian government begin on Tuesday after his visit to Rajghat. At Hyderabad House, Mr Trump will hold talks with Prime Minister Modi, which will be followed by an exchange of agreements and press statements. Mr Modi is hosting a lunch for Mr Trump.

In the evening, President Trump will meet President Ram Nath Kovind, who will host a dinner banquet for him, before Mr Trump flies back home, with a stopover in Germany. In between, President Trump is likely to attend a meeting of business leaders and interact with the staff of the US embassy in New Delhi.

During their talks, President Trump and Prime Minister Modi are likely to discuss issues related to trade and investment, defence and security, counter-terrorism, energy security. The proposed peace deal with Taliban in Afghanistan, the situation in the Indo-Pacific and cross-border terror are some of the other issues that the two leaders are likely to discuss.

New deals in the energy and the defence sector are expected to be signed during the visit, even as the two sides review the agreements signed during Mr Modi’s visit to US.

In the oil and gas sector, a deal worth $2.5 billion between India’s top gas importer Petronet LNG and America’s liquefied natural gas (LNG) developer Tellurian Inc is on the cards. Besides, a fresh pact between US energy company Westinghouse and Nuclear Power Corporation of India (NPCIL) is expected to be signed for the supply of six 1100MW nuclear reactors at Kovvada in Andhra Pradesh.

“Following resolution of Westinghouse’s bankruptcy issues the two sides (NPCIL and Westinghouse) are in discussion regarding the division of responsibility of the work. NPCIL has visited the US reference plant to understand the Westinghouse’s modular construction methodology,” said external affairs ministry spokesman Raveesh Kumar.

In addition, a cooperation agreement in the space sector is likely. India and the US are now cooperating in Mars exploration, helio physics and human space flight. On the commercial front, Isro has launched 209 satellites from the US onboard the PSLV as co-passengers. Isro and Nasa are together also building a microwave remote sensing satellite with dual frequency, L and S band, synthetic aperture radar. Nasa will contribute L band radar while Isro will contribute S band radar and the satellite.