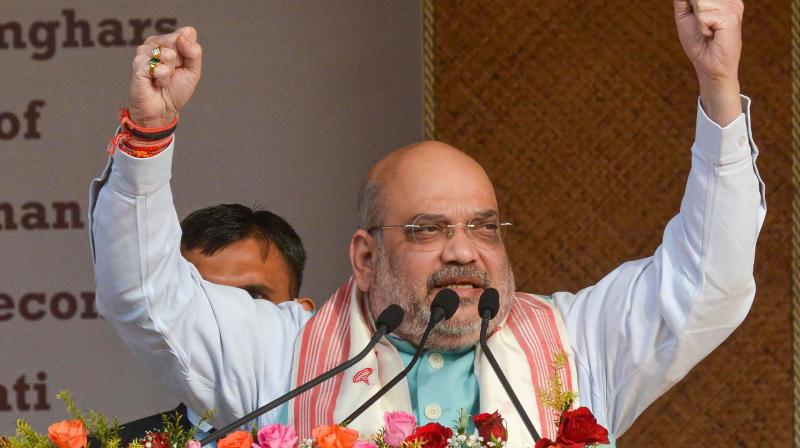 Srinagar: Security has been scaled up across Jammu and Kashmir ahead of Union home minister Amit Shah’s three-day visit starting on Saturday, with thousands of uniformed forces in battle dress keeping strict vigil at strategic and vulnerable locations and in many crowded areas of major towns. This will be his first visit to J&K after the Centre’s abrogation of Article 370 in August 2019.

Srinagar’s historic Lal Chowk and its neighbourhood and the scenic boulevard situated a furlong away are especially under strict security vigil with hi-tech Unmanned Aerial Vehicles (UAVs) or camera-fitted drones maintaining aerial surveillance.  The 7-km stretch of the road from the city’s Badyari Chowk to Nishat, which is part of the boulevard overlooking the Dal Lake, is being closed for vehicular traffic for three days from Saturday morning to enable smooth movement by Mr Shah and his entourage and to secure the venues of his official meetings.

Official sources said the Quick Reaction Teams (QRTs) of various security forces, particularly the J&K police and the CRPF, have been deployed at select places to meet any eventuality, while dog and bomb disposal squads are also in a state of readiness. Additional checkpoints have been set up all across the Union territory.

The sources said security was beefed up further in and around the areas with a minority population in the wake of the recent spate of targeted killings in which two local Kashmiri Pandits, a Sikh woman and three Muslim residents and four Hindu and one Muslim labourers from Bihar and Uttar Pradesh were shot dead. The authorities blamed the targeted killings on separatist militants and said some of the 17 militants killed in encounters in the past two weeks were involved in these incidents.

The sources said extraordinary security bandobast has been necessitated by the “possibility of future incidents of terrorism”. A security official who spoke to this newspaper on condition of anonymity said: “Whenever a VVIP is visiting a place, certain steps are taken to enhance security. In Kashmir, it is with greater reason vital to be vigilant. What is being done is to reduce the chances of terrorist attacks during the home minister’s visit and to prevent the recurrence of unfortunate incidents in which 11 civilians lost their lives recently.”

CRPF DIG (operations) Mathev A. John said: “The decision to use the UAVs for aerial surveillance has been taken in the wake of recent attacks on minority community members and non-local labourers.”

Mr Shah is due to hold a series of high-level security review meetings in Srinagar and Jammu. He will also evaluate the work done on the development front, particularly the PM’s Development Package (PMDP) for J&K.

He will be accompanied by Union home secretary A.K. Bhalla, other senior MHA officers and the heads of various Central armed police forces and intelligence agencies, including the Intelligence Bureau, official sources said.