Trump, who is known to make inaccurate statements, claimed that Prime Minister Modi asked him to mediate on the Kashmir issue 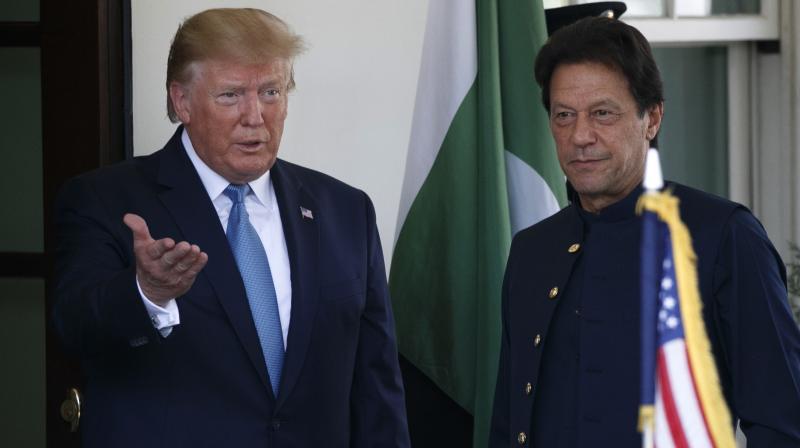 Trump said that he is ready to help, if the two countries ask for it. (Photo: AP)

New Delhi/Washington: US President Donald Trump on Monday offered to be the "mediator" between India and Pakistan on the Kashmir issue as he met Prime Minister Imran Khan at the White House where the two leaders discussed a host of issues, including the Afghan peace process.

The Indian government has denied President Trump's astonishing claim that Prime Minister Narendra Modi had asked him to mediate.

"We have seen @POTUS's remarks to the press that he is ready to mediate, if requested by India & Pakistan, on Kashmir issue. No such request has been made by PM @narendramodi to US President," Ministry of External Affairs spokesman Raveesh Kumar tweeted.

We have seen @POTUS's remarks to the press that he is ready to mediate, if requested by India & Pakistan, on Kashmir issue. No such request has been made by PM @narendramodi to US President. It has been India's consistent position...1/2

"It has been India's consistent position that all outstanding issues with Pakistan are discussed only bilaterally. Any engagement with Pakistan would require an end to cross border terrorism. The Shimla Agreement & the Lahore Declaration provide the basis to resolve all issues between India & Pakistan bilaterally," he said.

Trump, who is known to make inaccurate statements, claimed that Prime Minister Modi asked him to mediate on the Kashmir issue. "If I can help, I would love to be a mediator. If I can do anything to help, let me know," Trump said in response to a question.

Trump said that he is ready to help, if the two countries ask for it. India has not been engaging with Pakistan since an attack on the Air Force base at Pathankot in January of 2016 by Pakistan-based terrorists, maintaining that talks and terror cannot go together. Trump claimed that Modi and he discussed the issue of Kashmir in Osaka, Japan on the sidelines of the G-20 Summit last month, where the Indian prime minister made an offer of a third-party arbitration on Kashmir.

"I was with Prime Minister Modi two weeks ago and we talked about this subject (Kashmir). And he actually said, 'would you like to be a mediator or arbitrator?' I said, 'where?' (Modi said) 'Kashmir'," Trump said. "Because this has been going on for many, many years. I am surprised that how long. It has been going on (for long)," he said, with Khan responding 70 years.

"I think they (Indians) would like to see it resolved. I think you would like to see it resolved. And if I can help, I would love to be a mediator. It should be....we have two incredible countries that are very, very smart with very smart leadership, (and they) can't solve a problem like that. But if you would want me to mediate or arbitrate, I would be willing to do that," Trump said.

"So all those issues should be resolved. So, he (Modi) has to ask me the same thing. So maybe we'll speak to him. Or I'll speak to him and we'll see if we can do something," Trump said.

"We have a very good relationship with India. I know that your relationship (with India) is strained a little bit, maybe a lot. But we will be talking about India… (it's) a big part of our conversation today and I think maybe we can help intercede and do whatever we have to do. It's something that can be brought back together. We will be talking about India and Afghanistan both," Trump told Khan.

Khan, who was sitting by Trump's side in the Oval Office of the White House, said that he is ready and welcomed such a move by the US.

"Right now, you would have the prayers of over a billion people if you can mediate (on Kashmir)," Khan told Trump. Khan was accompanied by Army chief General Qamar Javed Bajwa, Inter-Services Intelligence (ISI) chief Lt Gen Faiz Hameed and Foreign Minister Shah Mehmood Qureshi among others. Early this year, tensions flared up between India and Pakistan after a suicide bomber of Pakistan-based Jaish-e-Muhammed (JeM) killed 40 CRPF personnel in Kashmir's Pulwama district.

Amid mounting outrage, the Indian Air Force carried out a counter-terror operation, hitting the biggest JeM training camp in Balakot, deep inside Pakistan on February 26. The next day, Pakistan Air Force retaliated and downed a MiG-21 in an aerial combat and captured Indian pilot, who was handed over to India on March 1.